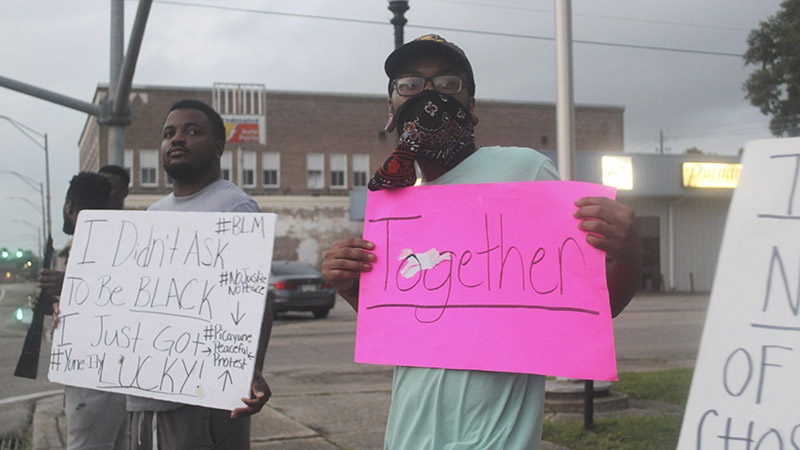 Protests continued in Picayune Wednesday, June 10. Protestors began handing out free food and water to passersby after some food was donated to them. Photo by Cathy Cook.

Due to the threat of Tropical Storm Cristobal on Sunday, the nightly protests in Picayune in support of the Black Lives Matter movement were not held. Instead organizers gave out storm supplies, like water bottles and canned food.

Food plates were donated to the group, said organizer Sabrina Staples, so the protesters offered free dinner to passing vehicles. On Tuesday, protesters arrived early to give out water bottles and canned food from the gazebo on the other side of the street near the Greater Picayune Area Chamber of Commerce. The group plans to put together care packages with any additional food and supplies, said Staples.

Later in the evening the group moved back in front of the post office with signs that read “Black Lives Matter,” “Silence is Betrayal,” and “I can’t breathe.” They stood in front of a table laden with food plates that were handed out to passing cars.

Yune-ify, the organization holding the protests, is promoting the #8cantwait campaign, said Staples. The campaign advocates for eight more restrictive use of force policies nationwide: banning chokeholds, requiring de-escalation, requiring warnings before shooting, requiring exhausting all alternatives before shooting, requiring officers to intervene when they see examples of excessive force by other officers, banning shooting at moving vehicles, creating clear restrictions on each use of force tactic and requiring officers to report every time they use or threaten to use force.

There was a smaller crowd protesting than the previous week, but there were still attendees who were coming out to their first protest.

“I’m out here just to do my fair share and be a part of a peaceful protest for justice for George,” said Malcolm Staten.

Staten had driven by past protests last week and decided to come out with some of his friends to show their support.

Jaylin Dees said there are many changes he’d like to see locally.

“I’d just like to see equal opportunity everywhere, because we say it’s equal opportunities and then there’s certain things that I’ve seen, not going to speak on them, not afforded to people who deserve them. Just because of skin color they were denied them,” said Dees.

Tony Washington said he wanted to show support for George Floyd and everyone else who has lost their lives due to police brutality.

“Growing up in a Black neighborhood, I just feel like I’ve been stopped by the police because I looked suspicious. I was 16, 17, and I wish that they’d just stop doing that,” said Washington.

All three said they came to the protest to help bring the community together.

“I feel like it’s important that we come together not only as a community but as a country, because we can get more accomplished together when we work together,” said Washington.