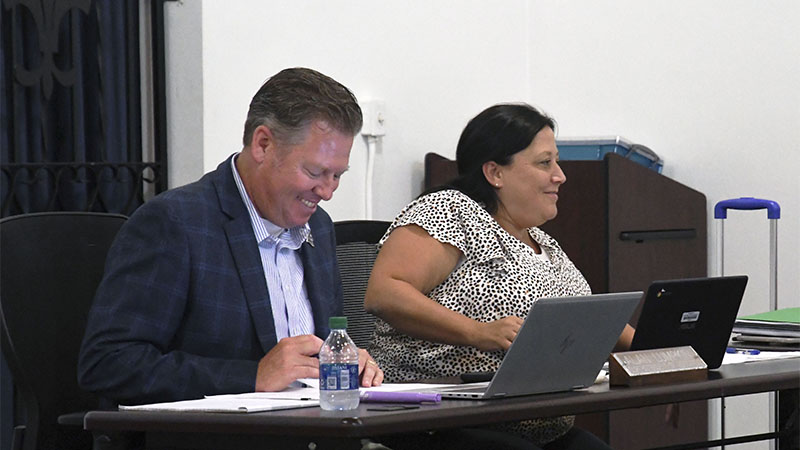 Down To Business: Superintendent Alan Lumpkin and Administrative Assistant Sheri Quarterman share a laugh prior to the beginning of Thursday’s Board meeting. Photo by Jonathan Mitchell.

Thursday evening, the Pearl River School District’s Board of Trustees met for its monthly meeting and discussed the progression of the district’s bond projects, along with other matters.

Following the approval of several necessary pieces of business the Board heard an update on the bond projects currently taking place across the district.

The middle school project is essentially complete with the rest of the district’s projects on schedule to be completed by the end of July.

District Business Manager TJ Burleson said the only building likely to not be completed by the end of July is the elementary library building renovation, which he estimated will be completed in September.

The Board also recently approved a change order for a series of projects that included work on the multipurpose building, along with additional parking lots and drainage.

However, some changes may be made to those projects because of the uncertainty regarding state funding for schools as states deal with the consequences of the COVID-19 pandemic.

Even things like possibly removing a parking lot from the overall project are being considered because of the money it could save the district.

“That (parking lot) alone is $152,000 so if we take that out it’s a lot of savings. There are a lot of unknowns with state funding and we have to be mindful of it,” Burleson said.

Just prior to entering executive session, the board heard bids on three separate hunting and fishing parcel leases that had been advertised with the price of $8.61 per acre.

The second property, which had a size of 125 acres and received three bids, was awarded to Alexander Teachout with a bid of $1,750.

No bids were received for the third parcel of land, which was a 531-acre parcel.

Burleson said it was unlikely the district would once again advertise the third parcel of land because it had been done before and no interest was shown in leasing it.

The next meeting will be July 16 at 5:30 p.m. in the church on the Endeavor School campus.