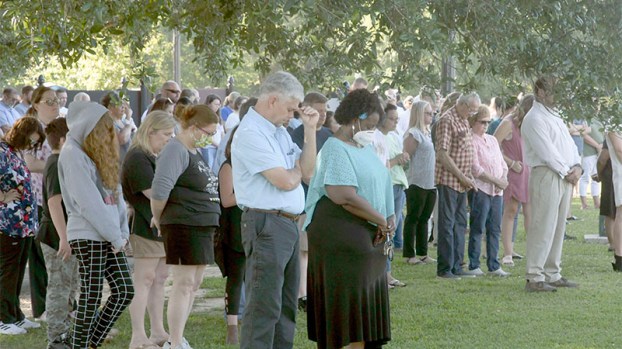 All Together: Picayune School District Superintendent Dean Shaw was one of the many community members who gathered at Crosby Commons for the Prayers for Peace event. Photo by Jonathan Mitchell.

Community members from across the county gathered at Crosby Commons for an event meant to honor George Floyd and other victims of police brutality while also imploring citizens to love one another.

The Prayers For Peace event took place the morning of June 4 and was a chance for county members to gather and pray together in response to the murder of Floyd and the following unrest taking place throughout the nation.

Each speaker shared a message of love, hope, positivity and the need for change not only in the community, but across the nation and world as a whole.

Community member Rose Gray said having the gathering in the middle of the community not only allowed more people take part, but it also helped break down the barriers of everyday life.

“I think it’s good to have these events on a common ground and get us out of our churches because we separate in our own church and we forget about everyone,” Gray said.

A common theme throughout the event was the need for community members to love each other and understand other people’s perspective.

Hickman’s speech was wide ranging, but a topic he focused on was the necessity of treating others the same way they’d want to be treated.

“What’s going to fix these problems is (when we) start valuing people like God values people,” Hickman said.

The event had a good turnout even as the majority of attendees stood in the shade to escape the Mississippi heat during the speeches.

Community member Krista Croney said the speeches should serve as a wake up call for community members to reflect on their own behaviors and how it affects others.

Following the event’s end, the crowd began dispersing and going back about their daily lives, but Gray said she’s hopeful the event will spark change.

The attendees may have learned some valuable lessons from the speakers and Gray wanted events like Prayers For Peace to continue occurring in Pearl River County.

“It’s not about certain religions, it’s not about where you serve at, it’s just a unified place with everybody coming together and joining for one cause. I just pray it happens again, I hope this isn’t the end of it,” Gray said.

Peaceful protests continue in Picayune in support of equality