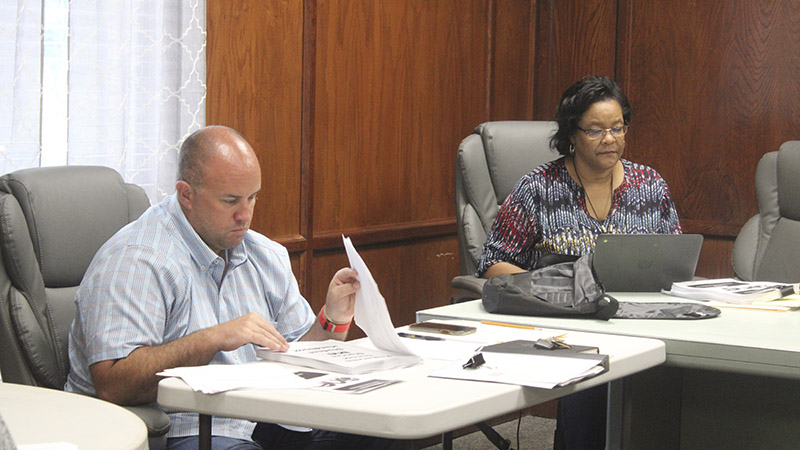 for review: Poplarville School Board member Jason Baker and Board president Violine Jordan look over policy changes during the regular School Board meeting. Monday’s budget hearing and Board meeting was the first time the school board has been physically present in the Board room in several months. Cathy Cook | Picayune Item

For the 2021 fiscal year, the district has a projected revenue of $19.3 million and budgeted expenditures of $19.4 million.

There are cuts to the district’s budget in every department, said Superintendent Konya Miller.

The district is seeing an increase in federal funding due to funds from the CARES Act, but how those funds can be spent is limited. Since it is a one-time source of money, it will not be used for staffing.

There have only been two years where the district has received the full funding the Legislature is required by state law to give, said Sandifer.

The ad valorem taxes for the school district cost tax payers an estimated $24 to $60 per month. For property owners with homestead exemptions that cost is lower.

The largest expense is payroll, $11.1 million, 57 percent of expenses. Employee benefits, which are budgeted at $4 million, 21 percent of the expenses, are the largest increase in expenses from the previous fiscal year. Salaries and benefits together make up 78 percent of the district’s expenditures, said Sandifer.

Property services are budgeted at $743,739, almost 4 percent of the budget, and consist of costs like utilities, cleaning services and repairs and maintenance.

Purchased services including transportation, insurance, postage and advertising makeup $449,203, or 2 percent, of the budget. The school district spends slightly more on transportation than other districts because buses pick up students across a wide geographic range, said Sandifer.

There is $1.5 million, 8 percent, for supplies, which includes textbooks, fuel and oil, food and library books. Feeding students takes around 5.5 percent of the overall expenses, said Sandifer.

There is $643,337 budgeted for property. Most of those funds are set aside for the purchase of two new buses, said Sandifer.

There is $145,447, less than one percent, budgeted for other items, which includes paying debt principal, interest, dues and fees.

The district has no capital projects planned, said Sandifer.

Of the federal funds the district expects to receive, $433,000 is CARES Act money. Those funds can be used for costs associated with COVID-19, like recouping cleaning costs, providing safety and security, buying technology and supporting mental health, said Miller.

The money from the CARES Act has been allocated to the school, but not received yet. The district still needs to write plans for how it will spend those funds, said Miller.

The district has been told it will receive three sets of CARES Act funds. The first set, the $433,000, will primarily be spent on computers, said Sandifer. The second set of money can be put towards mental health, she said.