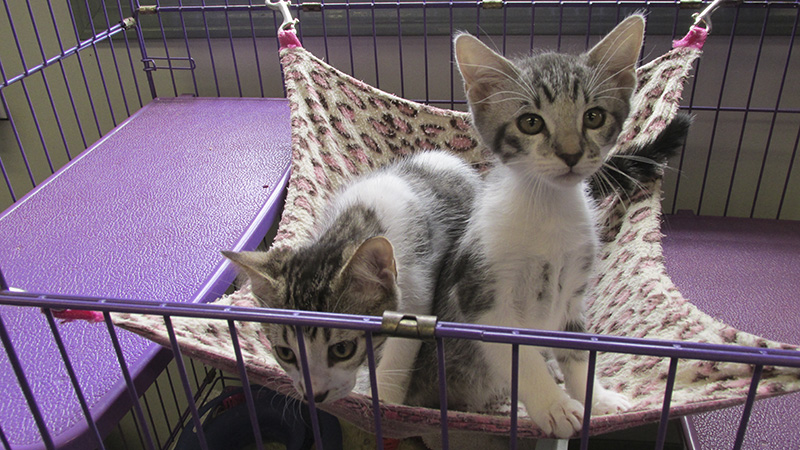 These kittens are available for adoption at the Pearl River County SPCA. Photo by Laurel Thrailkill

Though many saw the negative effects of COVID-19 in the past months, at Pearl River County SPCA, puppy and kitten adoptions saw an increase that correlated with the pandemic.

“We can’t hold on to puppies and kittens,” shelter director, Judy Wheaton said.

One of the negative affects of COVID-19 for the shelter was that it was forced to limit almost all its volunteers from working at the shelter in person, but the shelter saw an increase in people willing to foster animals in their homes during the time of the pandemic as well.

Wheaton said many people want to volunteer but the shelter has been forced to decline due to COVID-19 concerns. The shelter stopped accepting volunteers shortly before Gov. Tate Reeves’ shelter-in-place order went into affect. Wheaton said at one point the shelter was operating with a reduced staff due to the reduced number of animals at the shelter.

The shelter has been taking precautions to keep the guests, volunteers, staff and animals safe. Only a limited number of people are allowed in at any given time and everyone is asked to remain six feet apart. The staff members are wearing masks.

Though the shelter is still not accepting new volunteers, Wheaton said that when PetSmart allows animals to be put up for adoption again in its stores, the shelter will consider bringing in volunteers again.

“Initially, the biggest impact [of COVID-19] was the transports were stopped,” Wheaton said.

Wheaton said that despite the challenges, the shelter has maintained a low euthanasia rate. No euthanasia was done due to a lack of space at the shelter.

“I have to praise the community,” Wheaton said. “Thanks to our community for being understanding and stepping up to foster. We’ve had a lot of support.”

Shelter manager, Beth Treadaway, said it is currently kitten season. There are several kittens available for adoption at the shelter currently.

Pearl River County SPCA’s doors are currently locked, but it is open to the public by appointment.

For information about adopting, fostering or donating to the shelter, call 601-798-8000 or visit the shelter’s website at prcspca.org.