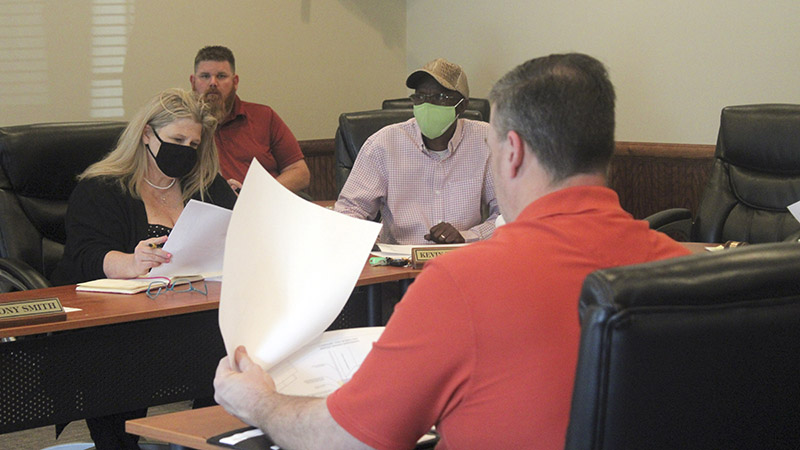 ONE STREET AT A TIME: Board members review information on the street paving project in Poplarville at Tuesday’s regular Board meeting. Photo by Cathy Cook

Approximately 40 percent of the paving in Poplarville for the 2019 paving project funded by the 2019 general obligation bond is complete, Jason Lamb with The Walker Associates informed the Poplarville Board of Aldermen at their regular meeting Tuesday evening.
The project is currently $30,000 under budget, Lamb told the Board, which may make it possible to pave two more streets that were alternates in the project.
The contractor is expected to return to paving work in late June or early July, said Lamb.
In a separate matter, the Board heard a presentation from Assistant Fire Chief Donald D’Antonio about a proposal to bring back the Squad 55 Program, which previously assisted with the North-End Volunteer Fire Department calls to improve call response times in rural parts of the north county. Previously the program had been volunteer, but if brought back it could potentially be staffed by the Poplarville Fire Department and managed by Fire Chief Jason Bannister with funding from the county, said D’Antonio. Several proposals for how the program could be funded are still being developed, he said.
In a separate matter, the Board took tax increment financing bond issuance under advisement. The TIF Bonds would be used to pay the College Square Shopping Center developer for a portion of the cost of constructing the facility as an economic incentive.
There are two proposed terms for the TIF Bond issuance. One would cost the city of Poplarville both more in interest and principal, but both proposals have the same annual payment. For a 10 year TIF Bond Issue the proposed interest rate is 5.5 percent, with a principal of $590,589, accrued interest of $192,932 and an annual payment of $78,352. The proposed 15 year TIF Bond Issue would have a 6 percent interest rate with a principal of $760,975, $414,306 of interest accrued and an annual payment of $78,352.
In other business the Board:
—Authorized renewing the Blue Cross-Blue Shield Policy for city employees for the next fiscal year. The insurance rates from the company have decreased for the third year in a row, City Clerk Jane O’Neal told the Board.
—Approved paying $4,319 to CEI Concrete Services, LLC for curb replacements and repairs.
The next Board meeting will be Tuesday July 7 at 5 p.m.