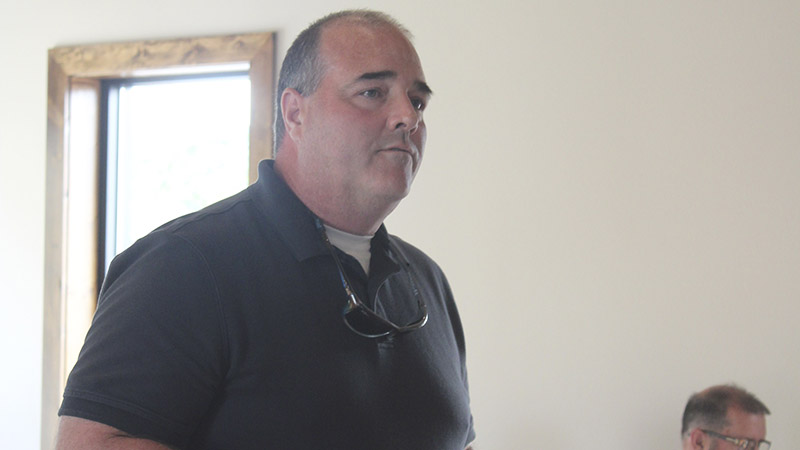 progress: MDOT District Engineer Kelly Castleberry updates the Pearl River County Board of Supervisors about ongoing projects in the county. The Highway 11 expansion is one ongoing project, which is scheduled to be complete in August of 2022. Cathy Cook | Picayune Item

The Board of Supervisors approved a motion to keep county offices operating with drive-thru or walk up services as they have been for the past several months and reopened the county fairgrounds for events.

The county offices limited their services to drive-thru or walk up to limit the spread of COVID-19. Chancery Clerk Melinda Bowman and Tax Assessor Gary Beech both said they have not received complaints about how their offices are currently providing services. Bowman said the public actually seems quite satisfied to be able to receive services without having to enter an enclosed space.

In a separate matter, Mississippi Department of Transportation District Engineer Kelly Castleberry gave the Board an update on MDOT projects in the county.
The two current projects are the three curve project, which is complete and the Highway 11 expansion, which is scheduled to be complete in August of 2022.

MDOT plans to spend $50 million in Pearl River County in upcoming projects over the next two years, said Castleberry. Those projects include an overlay of Highway 11 south of

County engineer Les Dungan asked if the county would be offered any assistance to repair wear and tear that county roads might sustain while the Hogpen Branch Bridge is closed. A previous two-week closure of Highway 43 caused damage to county roads, said Dungan.

Castleberry said that since MDOT has an official detour route planned on state aide roads, it cannot offer the county financial assistance. The Board could restrict weight limits on the county roads while the bridge is closed, suggested Castleberry, to discourage eighteen18-wheelers from choosing a route besides the official detour. The bridge’s replacement will be fast tracked, said Castleberry, so it is planned to take six to eight months.

District II Supervisor Malcolm Perry asked if MDOT would consider building a detour bridge. Castleberry said the bridge does not have enough traffic to justify a detour bridge, which would almost double the cost of the $2.5 million project.

In a separate matter, District V Supervisor Hudson Holliday said the Board has received numerous calls about safety issues on Highway 11, especially at the Ozona railroad crossing and near where the McNeill Henleyfield Road intersects with the Highway. Holliday asked if MDOT would consider adding a traffic light in the area.

Castleberry said MDOT is planning to do studies at both intersections to determine if a traffic light is needed. However, traffic counts are conducted when schools are in session to get a count of roads when they are busiest.

Toni Farmer, whose daughter Victoria “Tori” Odom was killed in a traffic accident in 2015 at the intersection of Ivy Street and Highway 11, was at the meeting to ask that MDOT work to slow traffic and improve visibility in that area of Highway 11.

“I would like to see my daughter’s be the last accident that killed someone there,” said Farmer.

In a separate matter, county engineer Les Dungan updated the Board that all of the county bridges under construction are open to traffic, except for McNeill McHenry. Dungan expects the bridge on McNeill McHenry to be open in the next one to two weeks.

—Approved the dissolution of the Board of Trustees of Pearl River County Hospital and Nursing Home.

The next Board meeting is scheduled for Wednesday, June 17 at 9 a.m. in the Board room on West Pearl Street.