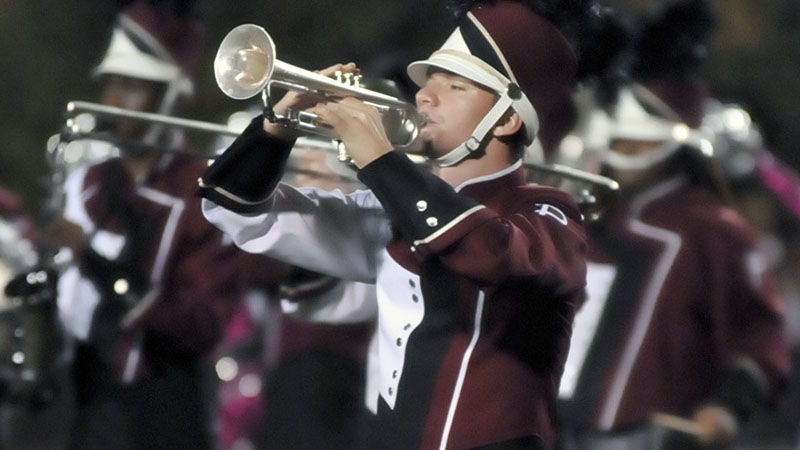 START PREPARATION: Bands are beginning planning their halftime shows, so that when band camp comes around the musicians and staff know what needs to be done to get ready for competition season. File photo by Jonathan Mitchell

County bands are hastily putting plans together in order to host band camps in July that are not only useful, but also safe for the musicians and staff involved.
The Mississippi High School Activities Association allowed for the resumption of extracurricular activities June 1, and the Picayune band wasted no time in getting back to work.
Not only were props being made and the halftime show planned, but the band also hosted drum line and drum major tryouts.
All exercises took place outside with musicians observing social distancing.
Temperature checks took place prior to the tryouts and Band Director John Cockrell said the overall attitude of the musicians was one of excitement and happiness.
“They seemed like they wanted to be back, be back with friends and have some sort of normalcy,” Cockrell said.
Ken White is the band director for the Poplarville and his band had its first rehearsal June 22.
Prior to the rehearsal the band hall was cleaned and everything so that White can educate and interact with his musicians in a safe manner.
The band went into the gym so that there was enough space for each person to have six feet of space between them, then White proceeded to talk with the musicians about what was expected from them as far as preparation goes for the band camp that’ll take place the last two weeks of July.
“I think (the musicians were) timid at first because I’m a new director, but once we got into it me and staff, as well as students, seemed to be energetic and excited. I think the newness is starting to wear off and it’s coming together,” White said.
White said he plans on splitting the practice field the band normally practices on in half with him taking one side along with a single group of students while an assistant takes the other half of the field with a second group of students.
The purpose of this is to allow the musicians to have enough room to spread out while still being in a familiar environment they feel comfortable learning in.
“Usually when it came to learning drill we’d all be on the field at one time but we can’t really do that per se, so we’re having to take on different (strategies),” White said.
Both bands are preparing like their respective band camps will take place at the usual time, which for Picayune will be July 20-24 and July 27-31.
Picayune Middle School Band Director Ellen Moore said the plan is to prepare for band camp and the fall season with the guidelines currently in place, and then make any alterations necessary as more information comes out and the COVID-19 situation changes.
“I would say we’re preparing for camp as usual and the season as usual and we’ll adapt to changes (the MHSAA or CDC) make,” Moore said.