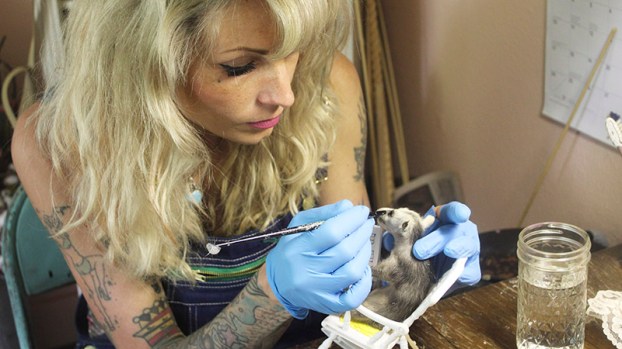 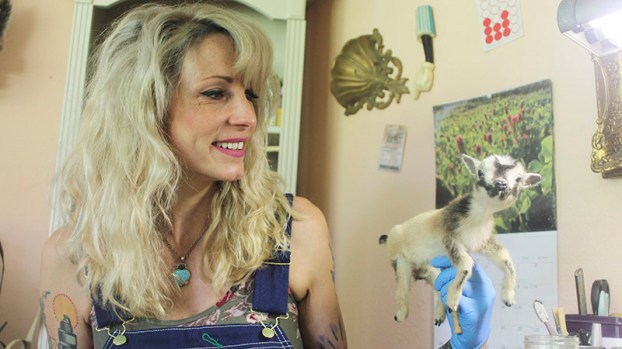 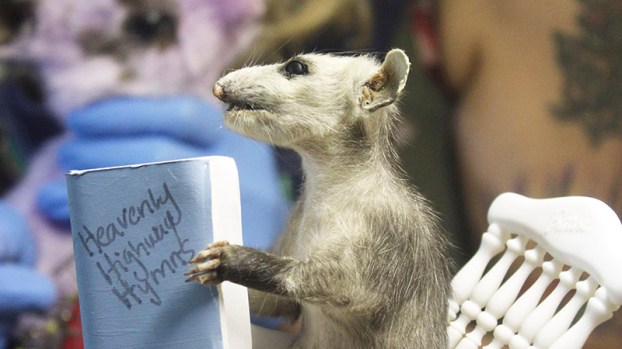 In progress: One of Bunny Lane’s latest works is a possum reading a book. She is working on a set with a fireplace to go with the possum’s rocking chair. 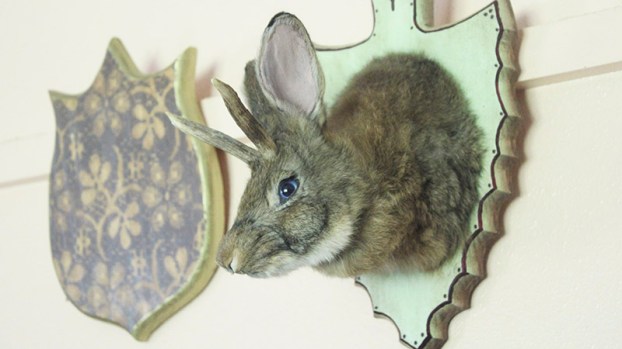 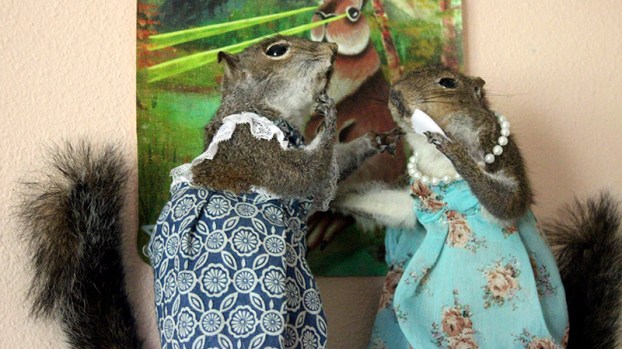 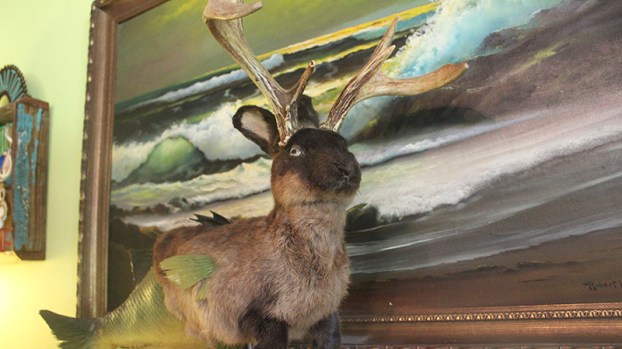 A stuffed bobcat hangs from the ceiling of Bunny Lane Taxidermy’s studio, waiting for its wings. Tina the stuffed bunny is silhouetted in the window, already fitted with hen wings. A petite stuffed possum is posed in a rocking chair reading a hymnal. A line of mounted rabbit heads await antlers to begin their second life as jackalopes.

Bunny Lane is a taxidermist who specializes in creating mythical creatures. She practices ethical taxidermy, which means she often works with road kill instead of conducting a lot of trophy work. Lane believes if someone is going to hunt an animal, it should be eaten.

“I don’t want them to go into the ditch or the trashcan,” said Lane. “I think that they should be honored. I like to take them and give them a new life.”

When she began, Lane specialized in jackalopes and estimates she’s made over 1,000 in the eight years since she began taxidermy. She has been working professionally for five years.

Lane gets her rabbits from a man who raises the animals for meat. Previously he simply threw the skins away.

Her work is playful and inventive, from a rabbit mount dyed bright purple, to a tent revival scene complete with squirrel choir, ice cream social and a squirrel outfitted in oversized overalls raising its hands in prayer.

“You want a squirrel riding a nutria with a cowboy? I’m your girl. I can make that happen. I’ll even make custom cowboy boots for the squirrel riding the nutria,” said Lane.

Lane uses all of her artistic skills, which include sewing, sculpture and painting, to create scenes using the animals. She might paint eyes with oil based or latex paints, sew small dresses, construct miniature home goods or sculpt octopus tentacles from epoxy clay for an octo-lope.

Tuesday she worked on a commissioned scene of a possum in a rocking chair next to a fire place that will really glow that represents a quarantine scene in response to COVID-19, complete with a video game console and pack of miniature toilet paper.

Lane did not plan to become a taxidermist. She was in beauty school when she began pursuing taxidermy as a hobby, but friends kept asking to purchase her creations.

“It was really amazing. I had no idea that my strange ideas—like if someone told me that I was going to be a taxidermist and people would pay me to make a carousel full of squirrels that spins—I never would have believed them,” said Lane.

Sometimes the animals give her the idea for what to create, like a mole that her cats brought home. The mole was already missing a leg, so Lane turned him into a pirate with a hook.
Lane purchased her first squirrel from a falconer friend. After mounting it she approached taxidermist David Ellis for help honing her craft, who taught her how to sculpt mannequins, among other taxidermy skills.

“Had I known how important he was I probably would have been really, really nervous—like I’m going to this rockstar taxidermist shop. But I was just so ignorant to that whole world and so eager. I was just like, ‘I brought you a pecan pie and this really ugly squirrel I mounted’ and we just hit it off instantly,” said Lane.

Having someone to turn to for advice over the years has helped her immensely, she said.
Lane typically displays her work at trade shows, but had her first museum showing in 2019. Her work will be on display at Lowe Mill ARTS and Entertainment in Alabama until June 13.

More of her work can be found on her Instagram @bunny_lane_ or on Facebook at Bunny Lane Taxidermy. She can be reached at bunnylanetaxidermy@gmail.com.