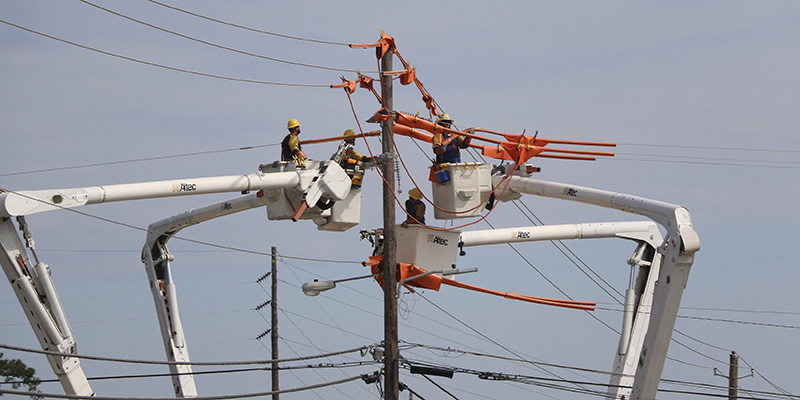 keeping the lights on: A group of contract workers prepare power lines along Highway 11 for relocation as part of the ongoing Highway 11 widening project. A vote will be held in August in relation to Mississippi Power Company’s franchise tax that will determine if the city will receive three percent instead of two percent. File photo by Jeremy Pittari | Picayune Item

The cities of Picayune and Poplarville are expected to hold a special election next month to determine if Mississippi Power Company will pay a two or three percent franchise tax to municipalities.

The election dates are tentatively set for August 4, pending city government approval.
Mississippi Power Company currently pays municipalities in Pearl River County quarterly franchise fees worth three percent of the electricity sold. At the end of the 25-year contracts, the residents of each city have to vote on whether or not to renew their city’s contract for another 25 years.

Mississippi Power pays each city a percentage of its revenue from retail sales of electric energy within their city limits or $300 per annum. Picayune City Clerk Amber Hinton said this election will determine if the power company will pay two percent, the minimum outlined by the Mississippi Public Utilities Act, or continue to pay three percent as the company has been doing for the past 25 years.

The Pearl River County Election Commissioners will be assisting the city of Poplarville in holding its election, said City Clerk Jane O’Neal. As part of the ongoing pandemic, the city will provide personal protection equipment, including masks and hand sanitizer, to poll workers and voters. The city will also follow any recommended guidelines for running the election from the CDC or the governor, said O’Neal.

Both the Poplarville Board of Aldermen and the Picayune City Council approved ordinances to renew contracts with Mississippi Power, but those will not become effective until the public votes on the ordinances.