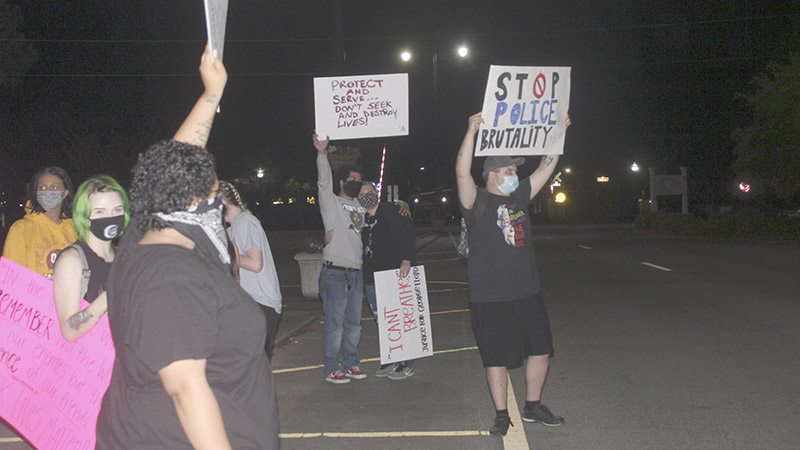 Calling for equality: Picayune residents hold up signs on Goodyear Boulevard Sunday, May 31, to protest police brutality that led to the death of George Floyd in Minneapolis, Minnesota The protestors shouted “Black Lives Matter” to passing cars, many of which honked their approval. Cathy Cook | Picayune Item

A small group of protesters knelt for nine minutes on Goodyear Boulevard in Picayune Sunday night in memory of George Floyd, whose death has sparked protests across the nation.

The group held signs that said “Justice for George Floyd,” “Stop Police Brutality” and “Are my sons next?” Protesters shouted “Black Lives Matter” as they stood along the boulevard holding their signs.

Passing cars honked in support or slowed down so that drivers could voice their support.

But not every passerby was supportive, said protestor Sabrina Staples. Later in the evening when the protestors walked to the post office on Highway 11, a few drivers yelled the “n-word” at the protestors and threw trash. One driver circled back four times to throw trash at the group, said Staples.

Secoya Edwards said she is amazed that police violence against Black people continues to happen, when so much can be captured on video.

“We deserve to live a peaceful life, just like everybody else,” said Edwards.

The protestors were a diverse group, with African American, white, Latino and Asian American people present.

“It’s important for white people to recognize the privilege that we have and that our skin color is something that hasn’t made our life any harder,” said protestor Brittany Bond.

Staples said she definitely sees issues with policing locally, but does not believe all police officers are bad. She added that several local police officers came by to check on the protestors Sunday night and offered them a thumbs up.

At the regular Board of Supervisors meeting Monday, District I Supervisor Donald Hart said he plans to work with local law enforcement leaders, including the Sheriff and the two police chiefs, to hold a summit to address concerns anyone in the community may have about local policing practices.

Hart said he’s concerned about police brutality and about the looting that he’s seen happening in other cities.

A second protest was planned for Monday night.