Athletes getting work in during summer baseball games 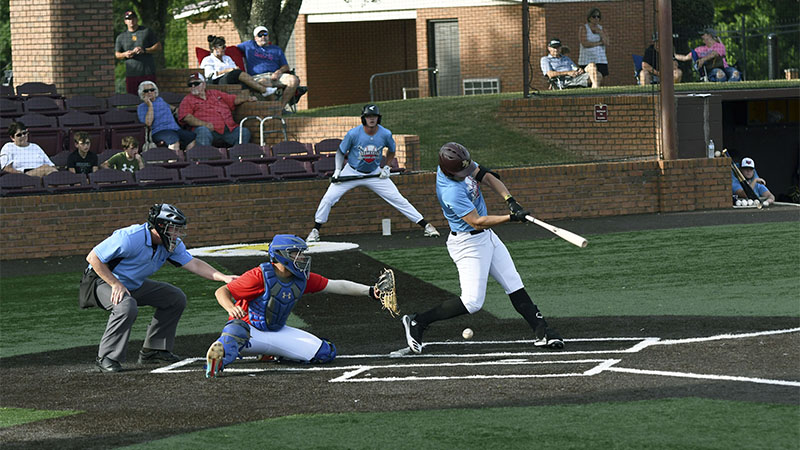 Foul Ball: Austen Izzio takes a swing at a pitch and fouls it into the dirt. The next pitch he would send into left field for a single. Izzio played high school baseball at PRC. Photo by Jonathan Mitchell.

The Southeast Collegiate League had two of its teams go head to head at Pearl River Community College Monday night that ended with both teams winning a game.

The Royals took on the Red Sox in a double header where the first game began at 5:30 p.m. and the second game took place at 7:45 p.m.

Dunhurst was behind the plate for the game that saw the Royals’ pitching staff only give up four hits while striking out 6.

Dunhurst went 0-3 at the plate with two strikeouts, but Izzio was able to earn a walk and would later score the final run for the Royals to seal the win.

The second game of the night was a high scoring affair with a final score of 7-6 in favor of the Red Sox.

Dunhurst was catcher and second baseman in the second game that saw several lead changes between the two teams.

He still couldn’t get much going at the plate, but Izzio went 2-2 with 2 RBIs as he also played two positions, left field and catcher.

The team played four games last week and was a little rusty, but with more time on the field the athletes are getting back into the groove of things.

“Our guys are getting better and having better at bats as a whole group. They’ve gotten better since last week seeing live pitching and seeing the ball well. Defensively it’s been a surprise there hasn’t been much of a letdown,” Robert Dunhurst said.

The league is only in its second week of competition, so the players are still getting used to being on the field after losing out on a major portion of their seasons due to COVID-19.

Each year the players are competing to make a team, keep their spot on a team, or even surpass a teammate and take their position in a squad.

Robert Dunuhrst said that constant competition means the players need to get reps in prior to the season starting otherwise they may not perform to the best of their abilities.

“All of the colleges are sending their guys out to play summer ball somewhere. Baseball is a sport of repetition and you have to get work in every day. You don’t get quality work in the batter’s box unless they’re facing live pitching,” Robert Dunhurst said.

As a summer league coach there’s a fine line to walk trying to change an athlete’s form or mechanics while not knowing what their college coaches want. Robert Dunhurst said he lets the majority of players do their thing unless a conversation took place with the player’s coach prior to the league starting regarding what they need to improve upon.

For the most part, the emphasis is on the players getting reps and improving their game through experience, not going undefeated.

“Of course we want to win each game, but in the grand scheme of things that’s not the ultimate goal. The ultimate goal is to further his career and help him be more successful,” Robert Dunhurst said.