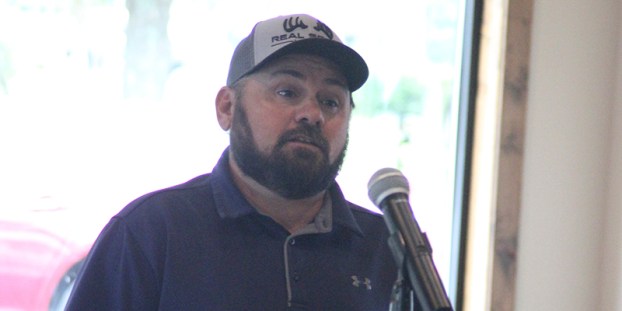 Road Manager Charlie Schielder speaks about the ongoing thefts of batteries from Pearl River County Road Department vehicles. In addition to batteries, 140 gallons of fuel has been stolen from the department's vehicles since early March. Photo by Laurel Thrailkill

The Pearl River County Road Department is upgrading its security after experiencing a dramatic increase in instances of batteries and fuel thefts from county equipment.

At the beginning of March, eight batteries, worth a total of $2,000, were stolen from equipment in one of the department’s yards. More batteries were stolen three weeks ago and another was taken earlier this week.

During the battery thefts, 140 gallons of fuel was also stolen from the department’s vehicles. Thefts have occurred in both rural and suburban areas, said Road Manager Charlie Schielder.

Often the thefts were below the insurance deductible, so the loss came out of department’s budget, said Schielder.

Replacement of the 24-volt batteries for road department equipment is costly and delays roadwork, he said. The batteries can cost $500 a piece.
In years past, theft of batteries and fuel from county equipment had been infrequent, said Schielder.

Department personnel are upgrading security on the yard that was broken into to prevent more theft.

“It’s sad that we have to do that. This is taxpayers’ money. Not only does it affect the budget, but also our time,” said Schielder.

At their regular Board meeting Wednesday, Schielder asked the Pearl River County Board of Supervisors if they would consider getting game cameras that could be used to monitor equipment at job sites 24 hours a day.

The cameras would pick up motion, then send the image back to employee phones.

The Board directed Schielder to work with County Administrator Adrain Lumpkin to find camera options and prices.

Schielder said the department would appreciate if people notify the Sheriff’s Department if they see equipment being messed with outside of the department’s work hours of Monday through Thursday from 6:30 a.m. to 5 p.m.

The Poplarville Board of Aldermen approved requests from both the Sweet Mississippi Tea Festival and the Blueberry Jubilee to use... read more