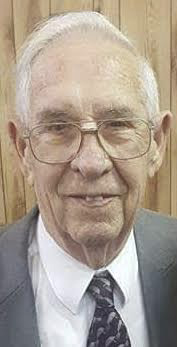 Melvin “Dale” Clabaugh arrived in Glory on May 14, 2020 after a brief illness. Dale was preceded by his older brother Darwin and is survived by June, his wife of 69 years; children, Stephen J. Clabaugh, Marilyn L. Clabaugh, Charlene D. Cufr, Thomas A. Clabaugh, W. David Clabaugh and Phyllis M. Taylor; 34 grandchildren; and 37 great-grandchildren.

Dale was born on December 24, 1931 in Sandwich, Illinois, to W. Henry and Nelly B. Clabaugh. He married his high school sweetheart, June Marilyn Tingley, on September 22, 1950 in Madrid, Iowa. Following four years of service in the United States Air Force, Dale worked for Pan American as an electrician at the Kennedy Space Center in Cocoa, Florida. Dale served as the president of Transport Workers Union from 1958 until 1969.

Following his professional retirement, he was installed as the Senior Pastor at the Chapel in the Pines, located at the Sunset Resort in Picayune, Mississippi, from 1997 to 2017 and continued to serve as Pastor Emeritus until his passing.

Dale and June have called Picayune home for over 39 years. They are well known for being willing servants in any situation, showing unconditional kindness and compassion, and for sharing the love of Christ wherever they go.

Services will be held at Christian Life Assembly of God on Monday, May 18, 2020. Visitation hours are from 9:00 – 11:00 a.m. with the service starting at 11:00 a.m. In lieu of flowers, the family is requesting donations be made to Teen Challenge.