Local barbershops, salons see influx of customers as they reopen 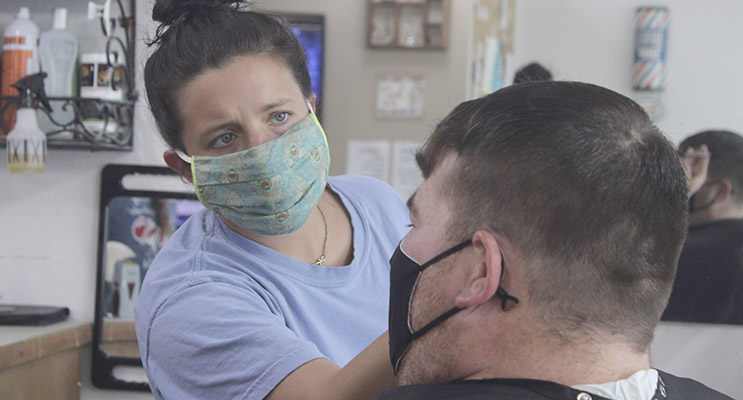 Brooklyn Kirk cuts a customer’s hair in a face mask at Ellen’s Barbershop Tuesday morning. The barbershop saw an influx of customers when it was first allowed to reopen its doors. Cathy Cook | Picayune Item

After spending over a month closed, barber shops and nail salons saw an influx of customers when they first reopened, but on the third week after reopening what were throngs of customers is now beginning to wane.

“It’s been incredibly busy,” said Jacob Guthrie with Good Luck Barbershop. “This week is the first week I’ve noticed some sense of normalcy, but the phone is still ringing a bunch.”

When the barbershop first reopened, business was hectic with 12 hour work days six days a week to keep up with the demand for haircuts, said Guthrie. Typically the barbers work nine to 10 hours a day.

“You lose a month and a half of work, so I don’t think you ever really catch back up on that. You get back to normalcy a little bit with regulars,” said Bond.

Picayune Nails and Day Spa also saw an influx of customers when staff opened the doors again, said receptionist Tiffany Nguyen. The nail salon was fully booked the first week it reopened. Tuesday was the first slower day that Nguyen has seen since the business reopened.

Nguyen said closing the salon’s doors had a short-term impact, but she thinks long term the business’ regulars will help it succeed.

Customers and workers at barbershops and nail salons are required to wear facemasks during appointments.

Facemasks are challenging at a barbershop, said Bond, and frequently have to be adjusted to cut hair around a client’s ears or neck. Adhering to the regulations is important in order to be in compliance with the state licensing board, she said. Shops that are out of compliance could receive fines or have licenses taken away.

“Most people put on the mask and sit down because they want a haircut. I’ve only had a handful of people say I’m not wearing one and walk out,” said Bond.

Nail technicians normally wear masks to protect from nail dust while working with acrylic nails and the liquid used on acrylic nails, said Nguyen. The salon has enacted stricter policies about the facemasks, requiring workers to wear them at all times. It has been more challenging to make sure customers wear their facemasks and adhere to social distancing throughout the entire appointment, but clients have been understanding, she said.
Plexi glass barriers have also been added to separate nail techs and customers during the appointment.

The capes all have to be laundered after a single use, a task that rotates between the shop’s barbers. Between additional laundering and extra sterilization of equipment and seats between each haircut, the shop’s employees have a lot of extra work. However, respectful customers who have been willing to go along with the state guidelines on mask wearing and patient with delayed appointment times have made reopening smoother, said Guthrie.