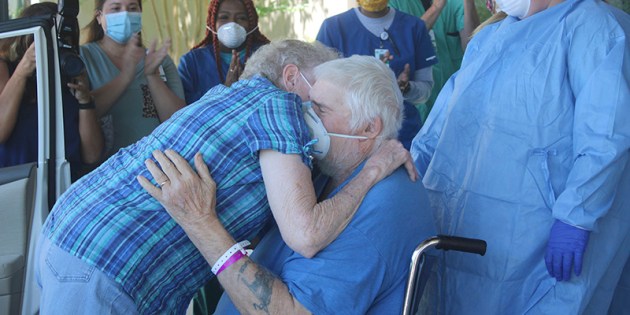 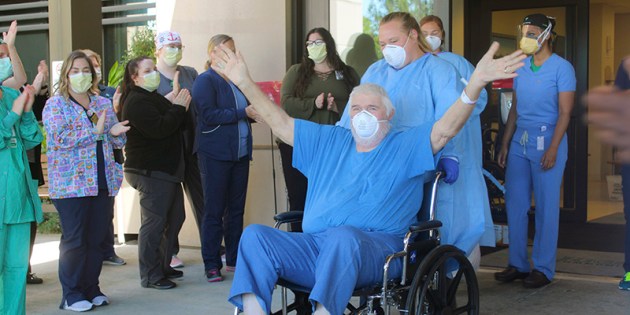 Newell Blankenship celebrates being discharged from Highland Community Hospital Wednesday. Blankenship spent five days on a ventilator during his 33 days in the hospital. Photo by Cathy Cook.

This week Highland Community Hospital discharged two more patients who had been on ventilators as part of COVID-19 treatment and for the first time, the hospital had no positive tests for the virus over over the weekend.

Newell Blankenship, the third COVID-19 patient discharged from Picayune’s hospital who needed a ventilator, went home Wednesday after spending more than a month in the hospital . The 81-year-old was met at the hospital doors with a row of applauding medical staff and family members.

“I haven’t seen him in 33 days,” said his wife Beverly Blankenship. “God brought him through all the way. He doesn’t do things halfway.”

Newell Blankenship told staff he loved them and said he was looking forward to sitting on his front porch and feeding birds.

The second patient was discharged Tuesday and was headed to a hospital on the coast for rehabilitation, said Highland Community Hospital Administrator Bryan Maxie.

Beginning with Polly Parker on April 30, Highland has now released three COVID-19 patients who had been on ventilators, and all three were older and had comorbidities, said Saddiq. The three recoveries are “nothing short of miracle wins,” she said.

“Literally everyone at Highland played a role in this,” said Saddiq.

The hospital’s staff is focused and is adapting in the face of the pandemic, said Director of Acute Care Kevin Hedgepeth.

The hospital still has one COVID-19 patient in the ICU who is trending to improvement, said Saddiq. Highland has a total of five patients with COVID-19, Hedgepeth said.

Over the weekend the hospital performed 20 COVID-19 tests , all of which came back negative, which is the first time Highland has had no new cases over a weekend, Maxie said.

Saddiq believes social distancing is helping slow the spread. It is still important for people to socially isolate even as the state opens, she said, especially for people at higher risk, like those older than 60 or who have comorbidities.

“Highland’s success has been Pearl River County’s success,” said Saddiq. “Anything anybody could do, they’ve done.”

Hospital employees are grateful for the many ways the community has helped, from providing meals to making PPE, said Hedgepeth. The hospital has also received support from Forrest General to acquire additional ventilators, while Emergency Management Director Danny Manley made sure the hospital had enough PPE, Hedgepeth said.

Early on the hospital’s staff addressed the need to expand ICU capacity when there were predictions it would run out of ICU beds, said Saddiq. The challenge ahead will be devising safe ways to care for patients who don’t have COVID-19, she said.