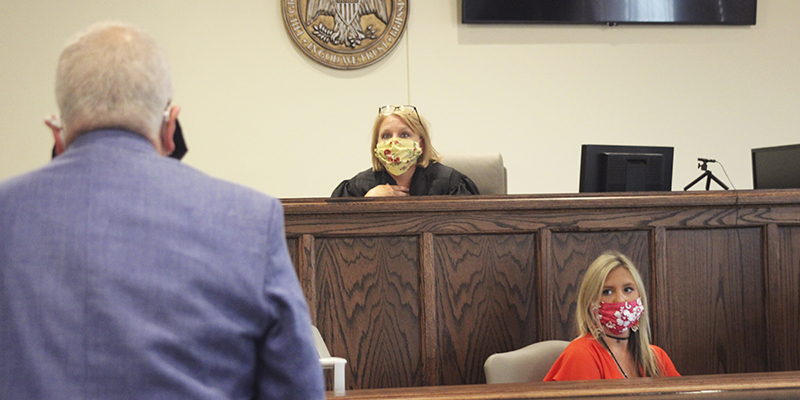 Keeping distance: Chancellor Rhea Sheldon speaks with a lawyer during a hearing at the Pearl River County Courthouse Annex on Thursday. Everyone who enters the building has their temperature checked and is required to wear a facemask to prevent the spread of COVID-19. Cathy Cook | Picayune Item

The Pearl River County Courthouse Annex opened Monday for its first day of court, although few people entered the building due to the pandemic.

Planning for the annex began in 2008 and ground was broken for construction of the building in 2018, according to previous coverage. The project cost almost $8 million, including construction, new furniture and computer cabling, said County Administrator Adrain Lumpkin.

The annex will be used for the offices of Chancery Clerk, Tax Assessor, 15th District Attorney’s office, E911 permitting and the IT department. The building includes a chancery courtroom and a courtroom for the county court. Circuit Court proceedings will primarily continue to be held in the courtroom in the original Pearl River County Courthouse, said Lumpkin.

The original Pearl River County Courthouse, located next door to the annex, was built in 1918, the same year as the 1918 influenza pandemic. The original courthouse cost $130,000 to construct and was designated a state landmark in 1984, according to Mississippi Department of Archives and History records.

The District Attorney’s office and the Chancery Clerk’s office have begun moving into the building, said Lumpkin. Moving the Tax Assessor’s offices will be a slower process, because the county has to work with the state to move anything connected with state car tags, said Lumpkin. He estimates it will be a month before all of the offices are moved into the new building.

Chancery Clerk Melinda Bowman said her office had moved court records dating back to the county’s foundation up to 2009, upwards of 27,000 files, into the annex as of Thursday.

Her face protected by a colorful facemask, Chancellor Rhea Sheldon heard Chancery Court cases in the annex during the week. Lawyers, clients, witnesses, clerks and bailiffs are all supposed to wear facemasks as well. Not all of the attorneys like the new requirements, said Sheldon, and wearing a facemask all day can be uncomfortable.

Witnesses are able to take their mask off while giving testimony to make sure the court reporter can get an accurate record of their words. However, witnesses will not go to the witness box in an effort to maintain social distancing.

During a hearing held Thursday morning, the defendant was delayed because they forgot their facemask in the car, and one lawyer asked a client to briefly remove their mask before proceedings began to make sure they were the right person.

Before anyone enters the building, their temperature is taken at the door. Although Chancery Court hearings are normally open to the public, extra people will not be allowed in the courtroom in an effort to reduce the spread of COVID-19.

In between hearings, the judge, bailiff, clerk and court reporter all jump up to disinfect door handles, tables and chairs around the room.

“We’re doing the best we can to keep justice going,” said Sheldon.

The chancellors in the 10th Chancery District operate in five counties, and in some courthouses it is harder to maintain social distancing or screen people entering the building, said Sheldon.

The 10th Chancery District is fortunate the new annex is open, she said, because the chancery courtroom in the old Chancery building was small and would have made social distancing difficult. The annex has also solved some security issues that the building had and the technology in the annex is an improvement, said Sheldon. The old Chancery building will be torn down and turned into parking, said Lumpkin.

Few trials have been held during the pandemic, but the Chancery Court has still conducted many hearings via videoconference, said Sheldon. Not everyone has access to reliable Internet or a computer equipped with a camera, which has been a challenge, she said.

Many attorneys rescheduled cases for June, so Sheldon said she expects a heavy docket in the coming month. People scheduled for court who are vulnerable to COVID-19 will be offered the option to use video conferencing or reschedule.

The public can expect court procedures employed to prevent the spread of COVID-19 to change as the guidance from the Mississippi State Department of Health changes, Sheldon said.

With the new annex completed, the county will begin renovations on the original courthouse to upgrade the electrical and heating systems and fix cracked windows, said Lumpkin.