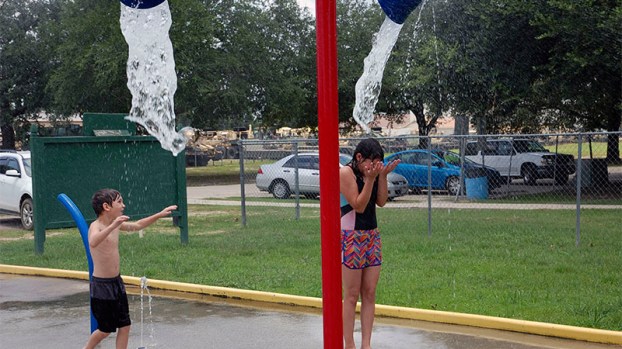 Return To Normalcy: Even with the reopening of Friendship Park, certain facilities at the park like the splash pad and playground will remain closed to the public. Photo by Jonathan Mitchell.

The new executive order from Gov. Tate Reeves lifted certain restrictions on outdoor gatherings, so now Picayune and Poplarville are determining the safest ways to reopen facilities back up to community members.

While Crosby Commons has remained open during the COVID-19 pandemic, Friendship Park was shut down to prevent large numbers of people from interacting socially.

Trevor Adam is the head of the Picayune Parks and Recreation Department, and he said even though it wasn’t an easy decision to make, closing Friendship Park was necessary given the situation.

“We hated it, but it was what was best for the community and getting a chance to heal, while getting a better understanding of what was happening,” Adam said.

Adam said it was harder to close down other parks in the area because there was no fencing or way to prevent people from gathering.

Crosby Commons was an exception when it came to the closures, which Adam said was a decision made based on the facilities offered.

As people moved into quarantine the city wanted to provide an area where community members could work out and use the walking track in a safe manner.

“We monitored it to make sure and see if people were using it correctly. We know just that little bit of peace we were able to give everybody, I know people appreciated that,” Adam said.

The closure of Friendship Park was lifted May 7 and certain facilities will be reopened including the baseball fields, softball fields and soccer fields.

However the splash pad and playground area will remain closed along with the tennis courts.

Adam said the city has actually used the closure of the park to complete maintenance projects, including resurfacing of the tennis courts.

Adam said for nearly two weeks work has been done to clear the surface of old material in preparation for the new paint that will be applied in the coming weeks.

Once the new paint is complete and everything is set up the courts will reopen.

Meanwhile, the playground and splash pad will remain closed until further restrictions are lifted.

Adam said between 100 to 200 people visit those facilities on a daily basis when the weather is nice, so the city wants to hold off on opening those until they know for sure they can do so safely.

Still, Adam understands the importance these facilities have and the impact they can have on the community.

“It’s been a long few weeks for everybody. A lot of times our stuff is an outlet and allows people to have peace and enjoy the outdoors. We’re looking forward to having everybody (back),” Adam said.

Normally baseball and softball would be in full swing right now, but those leagues have had to postpone games due to the pandemic.

Adam said practices would resume with guidelines in place to make sure everyone is being safe while playing ball.

The restart of those leagues and reopening of some facilities could serve as a small return to normalcy for the community.

“It’s been such a different time and what we’re most excited about is the fact that whole community has been resilient and vibrant in their excitement about getting back to the ball fields,” Adam said.

Poplarville Mayor Rossie Creel said the city park had been closed prior to the pandemic because there was an active construction project going on at that site.

Things like local baseball fields and the city lake were closed as well during the pandemic, but now have a shot of reopening with the lessened restrictions.

Creel said closing the lake was a simple task with barricades being put up along with signage indicating the area was off limits.

However, the city lake reopened following the governor’s executive order lifting the ban on beaches and lakes, which Creel said allowed the anglers to get back on the water during this unprecedented situation. Consideration is being made concerning the reopening of the baseball fields, but Creel said the park would remain closed for a couple more weeks as construction continues.

Creel said that if the park wasn’t under construction then the only thing that would’ve been opened to the public would’ve been the walking track, while keeping the playground area and splash pad off limits.

However, with construction nearing its end and restrictions around the state being lifted Creel is hopeful the park will open up in its entirety soon. “Hopefully when those two weeks go by some of the guidelines will be lessened a little more so we can open it fully,” Creel said.

Picayune color guard and other programs worry about gathering funds

The Picayune color guard is having to deal with issues never seen before by the program, and issues like the... read more