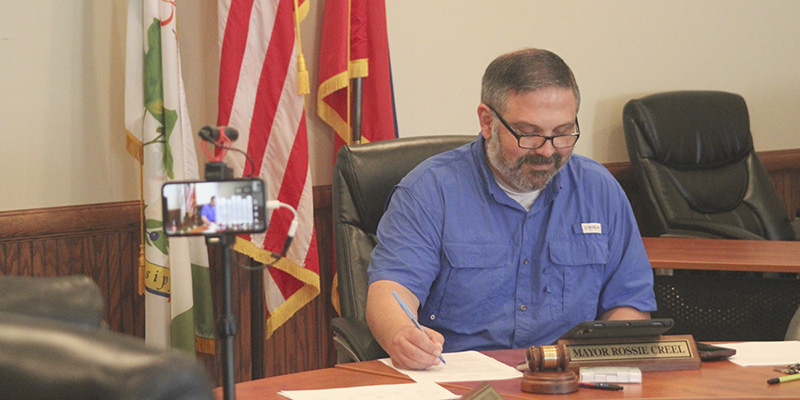 Mayor Rossie Creel was again one of the few people physically present in the Board room at the Poplarville Board of Aldermen's regular meeting Tuesday. County Administrator Adrain Lumpkin was also physically present to answer Board member questions about the planned E-911 consolidation. Photo by Cathy Cook.

The Poplarville Board of Aldermen passed a motion urging the United State Congress to support municipalities in Mississippi with direct federal funding to help protect citizens from COVID-19 during the Board’s regular meeting Tuesday.

Since the CARES Act does not mandate that state government share funds it received from the act with municipalities, the Board asked the federal government for funds to help with anticipated declines in revenue to help support emergency services like the fire and police departments.

The order states that municipal leaders need flexibility to use federal funding to address unbudgeted expenses and losses in revenue due to COVID-19. The Mississippi Municipal League recommended the Board consider the order, said Mayor Rossie Creel.

The Board also renewed its emergency declaration for COVID-19.

In a separate matter, the city of Poplarville can expect to pay $60,000 annually for the E-911 dispatch consolidation. The Board had previously taken the interlocal agreement under advisement, which was between the Board, Pearl River County of Supervisors and the city of Picayune’s City Council to consolidate law enforcement dispatch, because they had questions about the cost. Board members were told the city could expect to pay 7 percent of the cost, but did not have a clear idea of how much that total cost would be.

Creel said the total cost is estimated to be about $812,000 and the city of Poplarville will be expected to pay approximately $60,000.

County Administrator Adrain Lumpkin told the members of the Board of Aldermen that the central dispatch could go into operation four to six months after the county tells the vendor to begin.

Lumpkin said the cost estimate for the equipment was cut by $132,000 from earlier estimates, because earlier estimates for the cost of the consolidation were higher than any of the local governments could afford.

Police Chief Danny Collier said that based on demonstrations from the vendors involved, the system would work well.

The Board took the interlocal agreement under advisement again because the city of Picayune and the county still have some details to work out before a final version of the agreement is available, said Creel.

The Board did approve a contract with AAA Ambulance Services to provide five ambulances instead of four to the county and the cities of Poplarville and Picayune. There was some confusion over whether the language of the contract referenced the unsigned interlocal agreement for the E-911 consolidation, but city attorney Manya Bryan and Lumpkin clarified that it did not.