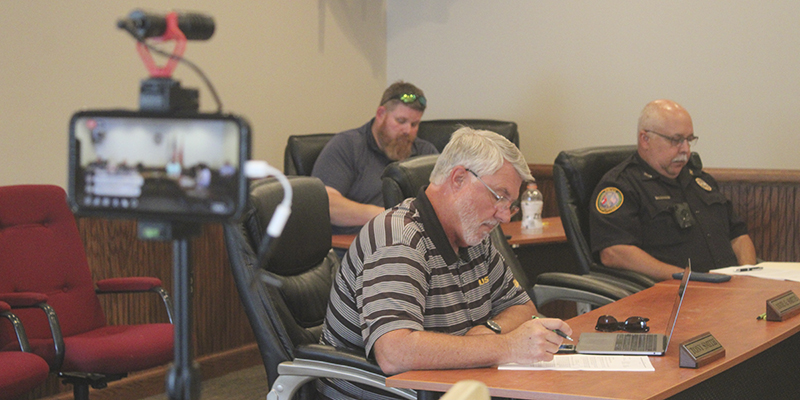 Board member Tony Smith was physically present in the Board room at Tuesday's Board of Aldermen meeting. Other Board members continued to attend via teleconference, a measure designed to prevent the spread of COVID-19. Photo by Cathy Cook.

The Poplarville Board of Aldermen approved requests from both the Sweet Mississippi Tea Festival and the Blueberry Jubilee to use the City Square Park for their festivals, both scheduled for October, during Tuesday’s regular Board meeting.

Organizers of the Sweet Mississippi Tea Festival received approval to use the park on October 16 and October 17 for this year’s event. This will be the second year the event will be held in the city of Poplarville.

The request from organizers of the Blueberry Jubilee to hold this year’s event in October, elicited debate among the Board members, although the Board ultimately approved the requested dates of October 2 and October 3 in a four to one vote. Alderman Tony Smith voted against.

Board member Shirley Wiltshire is on the Blueberry Jubilee Council and said the Council picked a date in October to avoid interfering with other festivals. She added that the grant the Jubilee Council receives has to be used by the end of December.

Mayor Rossie Creel said he thought the Council put the Board in a bad position by publicly announcing their date before receiving city approval to use the park. Smith said he thought the Jubilee’s organizers should look for another date further from the Sweet Tea Festival’s. Creel agreed by saying he thinks that having the two festivals so close together would be detrimental to the Sweet Tea Festival.

In a written comment provided to the Item, Jacob Cochran with the Sweet Mississippi Tea Festival said organizers are excited to have their dates approved and have been overwhelmed by positive responses from the community.

—Approved a payment of $5,094 to CEI Concrete Services LLC for curb replacements and repairs.

—Approved the 2020 to 2021 security contract with the Poplarville School District. Creel and Board member Russell Miller recused themselves from the decision. Creel is employed by the school district and Miller is married to the Superintendent.

The next Board meeting will be Tuesday, June 2 at 5 p.m.