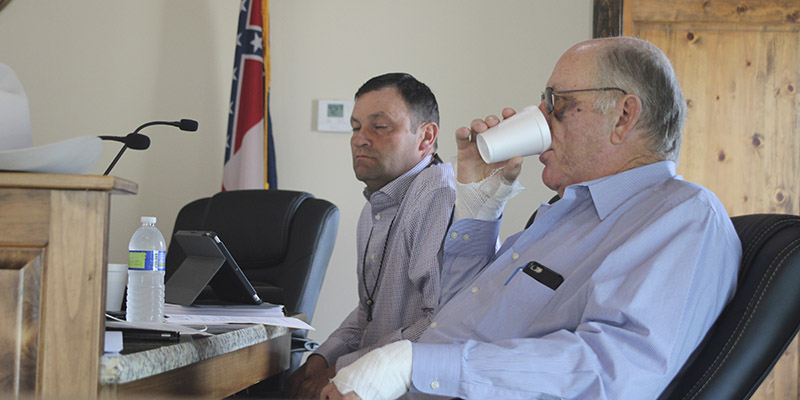 District III Supervisor Hudson Holliday listens to discussions of county business at the regular Board meeting Monday. Holliday only missed one Board meeting this year, held the Monday prior, after being involved in a serious motorcycle accident. Photo by Cathy Cook.

Pearl River County paid over $40,000 to G4 LLC, after the state Supreme Court settled a lawsuit between the two entities concerning taxes on an airport hangar.

At their regular meeting Monday, the Pearl River County Board of Supervisors ratified checks issued to G4, LLC. The county was involved in a lawsuit with G4 owner Tyron Gill over whether the company should be exempt from paying taxes on a half million-dollar airport hangar built on land leased at the Picayune Municipal Airport, according to previous coverage.

In February, the Mississippi Supreme Court determined that G4 should be exempt from the taxes and refunded any taxes already paid. The county issued a check for $40,372 in March to reimburse Gill for payment of those taxes and a check for $885 to pay one half of the appeal costs. The money came from the county’s general fund.

Future tax settlements to the Picayune Special Municipal School District will entail $20,875 being remitted to the county’s general fund, due to the litigation. Of the $40,372 paid by G4 in taxes, $20,875 was in school taxes, $19,031 was in county taxes, and the remaining $466 was paid in Chancery Clerk fees.

In a separate matter, the final disaster assistance housing grant check came in, for the amount of $50,000, marking the completion of a project that began last summer to assist people in the county whose homes were damaged by flooding caused by a May 2019 storm.

The project was funded by a $250,000 disaster assistance housing grant and led by Manna Ministries Director Jameye Martin. All volunteer labor was used to help provide housing to those affected by the storm.

In a separate matter, the Board discussed access to the Central Landfill. The landfill has recently seen an increase in traffic, backing up all the way to Highway 11 on a daily basis, said County Administrator Adrain Lumpkin. The landfill has to log incoming traffic and has had to reduce the number of residential cars able to throw away their waste at the same time due to social distancing, said Lumpkin.

The landfill is interested in a posting a sign asking residential customers to temporarily avoid bringing in yard waste, but would still allow county residents to bring in four free bags of household garbage, said Lumpkin. The sign would be in violation of the franchise agreement that the landfill has with the county, Lumpkin said, which is why Waste Management asked for the Board’s approval.

Board members said they had received numerous calls from residents concerned about access to the landfill, and several members said they could understand residents’ concerns. District I Supervisor Donald Hart noted that this might be the only time that many people have to clean up their properties.

Lumpkin said the Board can speak further with the landfill’s administrators and see if Waste Management can find a solution that meets everyone’s needs. No decisions were made regarding the requested sign approval.

—Approved a termite control contract with Stark Exterminators for the Board of Supervisors building for a $2,410 initial cost with a $600 annual renewal fee.