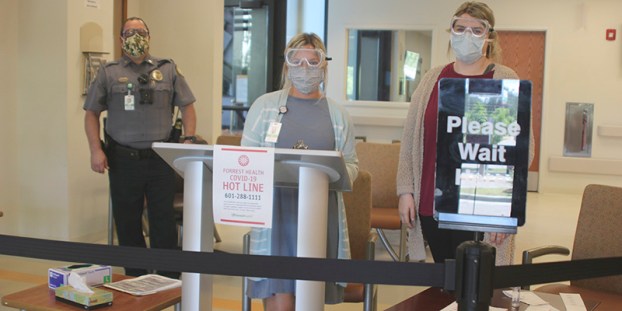 From left, Ricky Frierson, Angel Lincoln and Anna Bailey stand at Highland Community Hospital's only open entrance. Before being allowed into the hospital, people must sanitize their hands and have their temperature taken. Photo by Cathy Cook.

The rate of new COVID-19 cases at Highland Community Hospital appears to be holding steady or increasing only gradually, which hospital Administrator Bryan Maxie credits to more people in the community practicing social distancing along with government action, like the shelter at home orders enacted by state and local governments.

The hospital is seeing a flatter trend line instead of a rapid increase in COVID-19 cases, but it is difficult to tell when the number of cases will peak. He said the hospital is still receiving positive cases.

“We want to make ourselves believe and hope we’ve reached the peak, but we haven’t started to see a decline yet. The numbers haven’t shown that we’re on the down hill side of this just yet,” said Maxie.

In late March, computer modeling used by Forrest Health estimated that only 10 percent of people in Pearl River County were adhering to social distancing and shelter in place guidelines from the CDC. The number of people taking those precautions has increased, with an estimated 30 percent of county residents following the guidelines, according to the model.

The hospital has had 135 people test negative for COVID-19, and treated 44 positive patients. Of the 44, 11 patients were transferred out of the hospital for specialty care, 12 were not sick enough to be admitted for in-patient care and 14 patients, ranging in age from 37 to 97, were well enough to be discharged. There are seven positive COVID-19 cases currently being treated at the hospital, five of which are in the ICU. Five patients are in the hospital awaiting results from COVID-19 tests. One patient has died at the hospital from COVID-19. The patient who passed away came into the emergency room in respiratory failure and passed away in the emergency department, said Maxie.

The hospital is below capacity, with 31 patients in-house as of Wednesday. The facility has seen as many as 44 or 45 in-patients. A larger portion of patients have been in critical care due to COVID-19. Many of the COVID-19 patients needed a ventilator for support in breathing, said Maxie, and the hospital has opened seven additional ICU beds, for a total of 13. All of the ICU beds have access to ventilators.

The hospital’s administration was excited to see that Governor Tate Reeves decided to keep schools closed for the rest of the semester, said Maxie.

“We certainly want the economy to open back up and things to get back to normal, but the science has not shown us that this thing has went away yet. So we still need to adhere to social distancing and stay at home,” said Maxie.

If the community stops practicing social distancing and begins holding large gatherings when the rate of new cases is still holding steady or increasing, Maxie said he believes the number of cases would begin to rise again.

“The last thing we want to see is this flat line we’re on start to rise and start to be another peak in the curve,” said Maxie.

The hospital is adequately staffed, said Maxie. However, staff are all working extra shifts and taking on additional hours.

“People are getting tired. We’ve worked a lot of days,” he said.

The administrative staff has all worked 35 of the last 39 days.

“Any time you work under the stress of this type of a pandemic it wears on you more than normal healthcare does,” said Maxie.

The protective gear necessary during a pandemic also takes its own mental strain, said Maxie. Breathing while wearing a mask all day, especially the more protective N-95 masks, is difficult, he said.

The hospital does have the personal protective equipment it needs, said Maxie, and has been able to develop a process for re-sterilizing some of the equipment, like facemasks.

A team of employees is assigned to re-sterilizing PPE items on a daily basis, said Maxie, which has helped the hospital keep an adequate supply.

No staff members have been furloughed, laid off or had their pay reduced, said Maxie, and many staff members are being cross-trained to offer critical care.

“We want to thank the public around us. We’re certainly appreciative of the cities of Poplarville and Picayune, and the county governments of supporting our stances,” said Maxie. “We’ve had a lot of public outcry to the hospitals and pouring of love into here.”

County residents have fed hospital staff and organizations have offered assistance, like the free daycare services provided by First Baptist Church of Picayune to some staff members, said Maxie.

The first Poplarville Farmers Market of the year will be a drive-thru market that only offers food items due to... read more