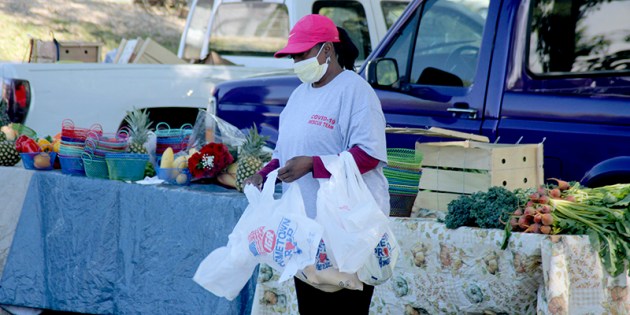 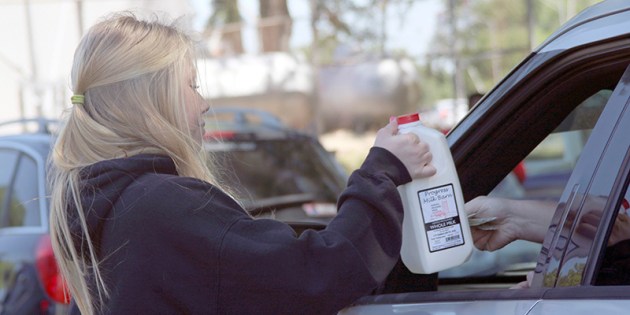 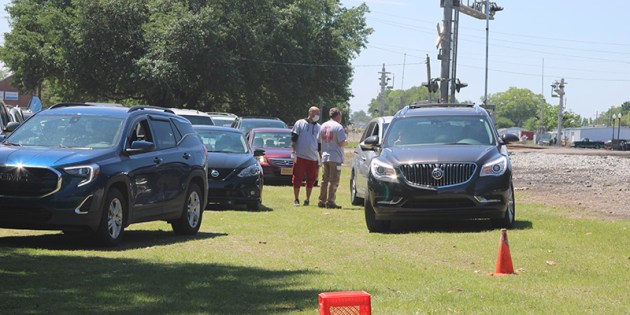 Vendors talk with shoppers to find out what they are interested in purchasing. The drive-thru markets were so heavily attended in Picyaune that organizers relocated to a vacant lot for the third market to improve the flow of traffic. Photo by Cathy Cook. 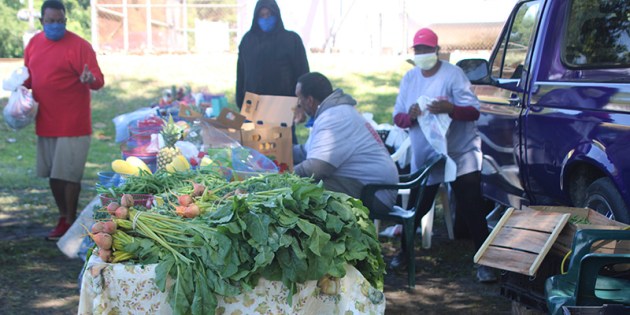 Local farmers markets have transformed themselves into drive-thru experiences due to the pandemic. Shoppers can still buy fresh produce, tamales, blueberries or meat from a local farm, all from inside their cars.

Local vendors talked to shoppers through their car windows and worked quickly to bag leafy greens or bring over a half gallon of milk.

Shoppers seemed enthusiastic about the opportunity to purchase local produce while sitting in a line of cars instead of visiting a grocery store, said organizer Christina Juneau with Black Creek Farms. Juneau’s daughter and husband both worked with her to speak with drivers, before running back to their trailer filled to bring over a cut of meat or carton of eggs.

At the second drive-thru Picayune Farmers Market on Wednesday, April 15 cars were two lines deep and traffic was heavy the entire time the market was open. To improve traffic flow the market relocated to a vacant lot at the corner of Main Street and Elizabeth Street for last Wednesday’s market.

The Poplarville Farmers Market’s first day of the year on Friday April 17 was less heavily attended, with one line of cars and a much shorter wait. Fewer vendors than planned came to the Poplarville market, said organizer April Grecho, but attendees were polite and easy going.

Grecho said it may take several weeks for more vendors to come to the market because as gardeners get further into spring, there should be more produce available.

Juneau directed traffic at the Poplarville market, shoppers stopped to ask her what was available in the market ahead. Betty Graves asked about strawberries, because she wanted to make strawberry jam. While Graves left empty handed, other shoppers were able to find what they were looking for, and what most of them seemed to be looking for was produce and fresh vegetables.

The Picayune market had offerings aside from food, including hand sanitizers from the Crittenden Distillery and from the Carriere based Canna Luxe.

Erica Snapp with Canna Luxe said the majority of their regular business is done at large farmers markets in the region, most of which have been cancelled due to the pandemic. Although selling at the Picayune Market could not replace those sales, it did give her a chance to make some sales and connect with customers in a time when many small businesses have their doors closed.