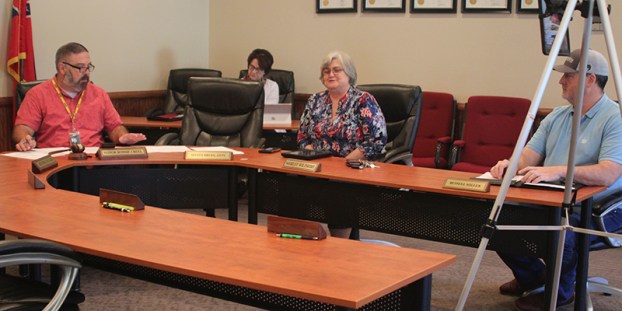 Members of the Poplarville Board of Aldermen held a meeting Wednesday to pass an executive order to entice citizens to shelter in place to stem the transmission of COVID-19. Photo by Cathy Cook.

Pearl River County is projected to have over 100 deaths from COVID-19, but that number could be reduced with more sheltering in place and social distancing, Hospital Administrator Bryan Maxie told the Poplarville Board of Aldermen during an emergency Board meeting Wednesday.

Maxie answered the Board’s questions about the modeling software that Forrest Health is using to predict the trajectory of the spread of COVID-19 locally and how many people in the county are practicing social distancing measures.

The model shows that only 10 percent of the population in Highland Community Hospital’s service area, the majority of which is Pearl River County, are adhering to shelter in place and social distancing recommendations.

Highland has a med surge capacity of 45 beds, an ICU of six beds and is estimated to reach surge potential on or about April 12, said Maxie.

As of Tuesday, Highland had eight patients in-house waiting on results from pending COVID-19 tests. Overnight, that number increased to 15 patients in-house awaiting results on COVID-19 tests, said Maxie. The majority of those tests are expected to be positive. The hospital has 3 confirmed COVID-19 cases in house, as of Wednesday. Three of the 16 confirmed cases that Highland has had come through its facility have recovered. The hospital has had positive results in patients from nine months old to 97 years old.

The predictive model being used takes in the health system as a whole, including information like the number of beds, the number of ICU beds, hospital occupancy, census information, service area population, length of stays and number of ventilators, said Maxie. When data is entered going back to day one of COVID-19 cases locally, the model is fairly accurate and even conservative on the estimates it offers for Pearl River County, said Maxie.

Board member Anne Smith pressed Maxie about what the hospital is doing to prepare for worst-case scenarios.

The healthcare system is trying to keep the two smaller hospitals in its system, the Pearl River County Hospital and Nursing Home and a hospital in Prentiss, free from any COVID-19 cases to prevent the spread of COVID-19 in either nursing home.

Mayor Rossie Creel asked if the hospital has any information about where in the county confirmed cases are coming from.

Maxie said a higher percentage of the confirmed positive cases have a Carriere address, while some have had Picayune addresses. Many of the cases are in clusters of people who have relationships with one another, like parents and children, neighbors or close friends.

Maxie said one of the largest issues at the moment are people gathering socially at essential businesses or taking their entire family for a grocery store visit, and he emphasized the need to stop social gatherings like bbqs or crawfish boils.

Board members responded by saying that entire families going to grocery stores or people coming together for social gatherings is not happening in Poplarville.

“The fact of the matter is, there could be 10 percent of the population in Poplarville that is carrying this virus and you’d never know it because you can carry it with mild symptoms and never know you have it and be spreading it to somebody else,” said Maxie.

Smith said placing an end date on the requirements could offer citizens hope. Board member Shirley Wiltshire responded that there is no way to place a deadline because no one knows yet when the pandemic will end and Board member Kevin Tillman said the Board does not want to offer people false hope.

Board member Russell Miller encouraged small business owners watching the live stream to apply for assistance from the SBA early, while Creel acknowledged that the local economy will take a hit. Creel said that the community recovered after Hurricane Katrina and will be able to do so again after COVID-19.

Mississippi Governor Tate Reeves issued what he called the first of what could be more shelter in place orders for... read more