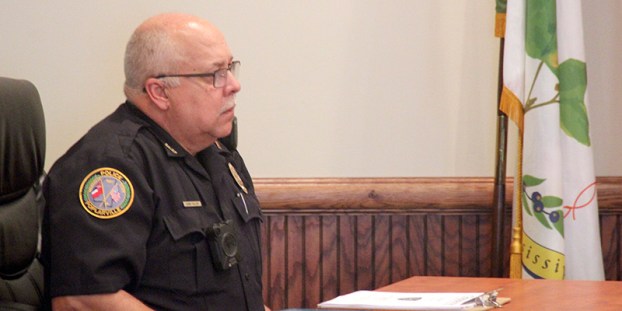 Poplarville's Board of Aldermen meeting was livestreamed to Facebook on Tuesday. Only three people were physically present at the meeting, including Police Chief Danny Collier, while other attendees participated through teleconference. Photo by Cathy Cook.

Despite a few technical difficulties that required adjusting a speaker setup, the majority of public officials at Poplarville’s Board of Aldermen were able to call in to a meeting held Tuesday.

The Board discussed the proposed interlocal agreement with Pearl River County for the E911 consolidation. While Board members were clear they intend to enter the agreement, the Board took it under advisement due to unanswered questions about the cost of the system to the city. City Clerk Jane O’Neal said she was concerned that while the cost to the city had been discussed with the county, none of the actual costs are written into the agreement.

Chief of Police Danny Collier said he spoke with the County Administrator about the cost on Tuesday morning. Collier said he was told that the E911 system the county received quotes for is a “Cadillac of a system,” but the county has requested that the “bells and whistles,” be taken off and a new quote be given, which should reduce the cost of the system.
Once the county approves the system, it would take a minimum of eight months to set it up, said Collier.

—Reviewed and kept in place their Emergency Declaration due to the COVID-19 pandemic.

—At the recommendation of Judge Fitzpatrick, appointed Jansen Owen as public defender at the rate of $345 per month. Matt Busby from the county’s public defender’s office will handle felony cases.

—Approved establishing a petty cash account for the Poplarville Police Department to use for procuring evidence. The account will be funded by forfeitures.

Pearl River County paid over $40,000 to G4 LLC, after the state Supreme Court settled a lawsuit between the two... read more