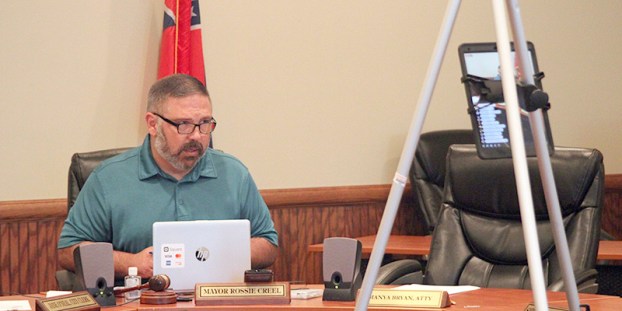 Mayor Rossie Creel speaks to Board members over the phone at Tuesday's meeting, while it is streamed live on Facebook. Photo by Cathy Cook.

The Poplarville Board of Aldermen decided that the city cannot afford to offer city employees who are stilling reporting for work hazard pay during the pandemic.

During a discussion at Tuesday’s regular Board meeting, Mayor Rossie Creel noted that while the federal government has said it might reimburse municipal governments for hazard pay or overtime, the reimbursement has not been guaranteed, and the city does not have the funds to offer hazard pay for all city employees on its own.

“We do appreciate (city employees), but we don’t have the budgets that some of our surrounding governmental entities have in order to be able to sustain that,” said Creel.

On March 31, the Pearl River County Board of Supervisors began a hazard pay policy that gives county employees who still have to report to a workplace a pay rate of time and a half. The policy is set to be reevaluated on April 13.

The city of Poplarville is taking measures to protect its workforce from COVID-19. The city tried splitting up the eight person public works crew to reduce the risk of spreading COVID-19, but the smaller crews were unable to manage the workload, said Creel. Although the full crew is working together again, workers are wearing masks and regularly washing their hands, he said. The public works employees have hand sanitizer dispensers and access to bulk sanitizer they can use to refill dispensers. Hand sanitizer dispensers have also been placed in City Hall, said Public Works Superintendent Sam Hale.

Board member Shirley Wiltshire has been making cloth face masks and requested a list of city employees who could benefit from them. She intends to make the masks so city employees can place their officially issued masks underneath the fabric masks for an extra layer of protection.

In a separate matter, Creel told the Board that Poplarville Farmer’s Market organizers are interested in setting up a drive through market with only food items available. No one on the Board was opposed to the idea, so Creel will inform organizers that they can move forward.

—Approved issuing a purchase order that cannot exceed $10,000 for concrete for drainage work that will replace some curbs and gutters and entail sidewalk repair in the city.

Despite a few technical difficulties that required adjusting a speaker setup, the majority of public officials at Poplarville’s Board of... read more