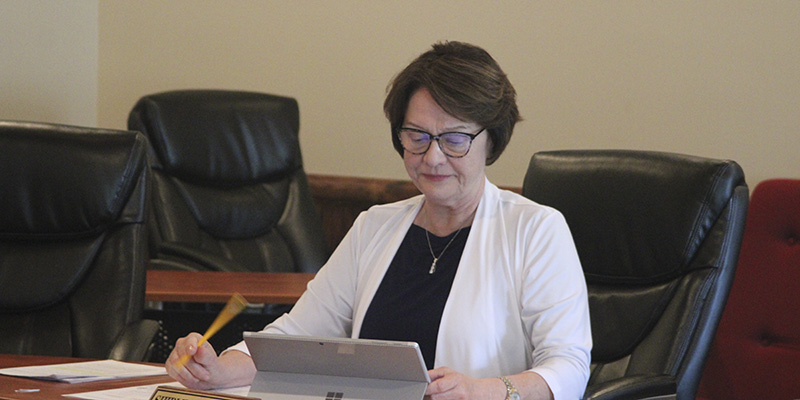 LEGAL ADVICE: City attorney Manya Bryan reviews information during Tuesday’s Poplarville Board of Aldermen meeting where the Board approved a motion to follow Gov. Tate Reeves’ extension of a statewide shelter in place order. Photo by Cathy Cook.

The City of Poplarville may utilize Pearl River County’s election commission to conduct its municipal elections in August.

City attorney Manya Bryan is developing an ordinance to abolish Poplarville’s municipal election commissioners so the Board of Aldermen can enter into an interlocal agreement with Pearl River County so the county’s election commissioners can conduct municipal elections. The Poplarville Board of Aldermen directed Bryan to develop the ordinance during Tuesday’s meeting.

In the past it has been difficult to get people to serve as election commissioners in Poplarville, said Board member Shirley Wiltshire, which is one reason the Board wants to transfer the duties to the county.

The city clerk would still have some duties related to running municipal elections, said City Clerk Jane O’Neal, but she believes having county election commissioners conduct elections for the city would be a great benefit to the city. O’Neal said she does not know what having the county conduct the elections might cost. The Board directed O’Neal to find a cost estimate, while Bryan develops an ordinance for the Board to consider at the next meeting.

In a separate matter, the Board again decided to wait to finalize the E-911 consolidation agreement with the Board of Supervisors, because the Aldermen still don’t have a clear idea of the cost. The consolidation will establish one central dispatch for all three law enforcement agencies in the county. Currently, the Sheriff’s Department dispatches calls for Poplarville’s Police Department.

Bryan recommended entering the agreement even though the cost estimate is not solid. She said the city will need to be part of the consolidation so that law enforcement in the county, the city of Picayune and the city of Poplarville can assist each other.

Board member Anne Smith said she agrees the city will need to enter the agreement, but was concerned about the lack of concrete numbers and the unclear project timeline. The city has some grant funding for the Poplarville Police Department that Smith was concerned may not be used by its deadline if the city enters the agreement without a clear timeline for the consolidation.

Mayor Rossie Creel said the county knows the city has a slim budget and that Poplarville’s cost will be minimal compared to the cost to Picayune and the county.

Board members said they would try to get their questions about the E-911 consolidation answered, so they can enter the interlocal agreement at their next Board meeting.

The next Board meeting will be Tuesday May 5, at 5 p.m.