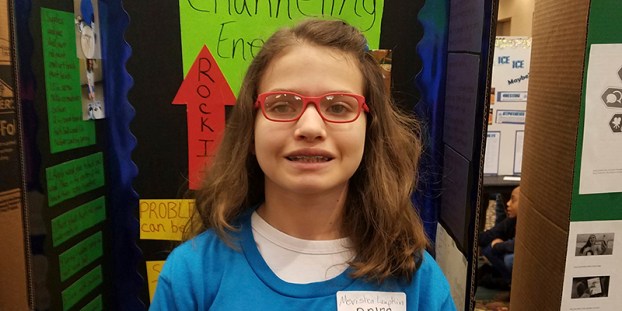 Big Win: Merishca Lumpkin, a student of Poplarville Upper Elementary who is autistic, earned a first place win in the Behavioral/Social Science category of the Region 1 Science and Technical Engineering fair for a project she made to help her autistic brother focus on his school work. Submitted photo.

A Poplarville Upper Elementary School student won first place in her category at the regional science fair for building a device that helps her older brother concentrate while he completes schoolwork.

Fourth grader Merishca Lumpkin took first in the Behavioral/Social Science category for 4th, 5th and 6th grade students at the Region 1 Science and Engineering Technical Fair on Friday, Feb. 28. For Lumpkin’s science fair project, she built a portable padded seat that allows the user to rock in any direction, with the help of her mother Dina Simoneux.

Lumpkin tested the seat with her brother Maven Lumpkin, who has difficulty sitting still to complete his schoolwork. Both siblings are autistic. Some people with developmental disabilities like to rock or move side to side, and the seat enables that movement, said Simoneaux.

When Maven uses the seat, he is able to sit and focus on his schoolwork for longer periods of time, and his therapists have seen an improvement in his ability to concentrate, said Simoneaux.

The judges were impressed with the originality of the project, said Simoneaux, and one even recommended looking into getting a patent for the device.

Merishca Lumpkin was nervous and a little overwhelmed by the number of people at the event, but she delivered her project presentation entirely on her own.

“It was a huge moment, just for her to be able to present like that on her own,” said Simoneaux.

Simoneaux was allowed to stay with her daughter to calm her nerves and help her answer questions from the judges.

“The other kids that were around us, they were very accepting of her,” said Simoneaux. “They realized she was different and I didn’t feel any kind of stigma or anything around us. They accepted her.”

Maven still uses the seat his sister built to help him focus on schoolwork.

Local has plans for Bertie Rouse

One Picayune business owner wants to put the historic former East Side Elementary School building back in use as a... read more