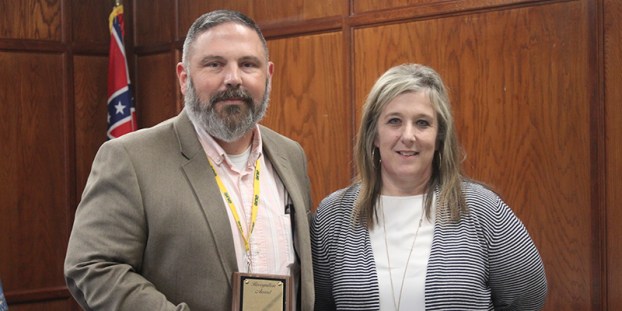 Transportation Director Rossie Creel accepts the award for the district’s director of the year. Poplarville High School Principal Jon Will was also recognized as administrator of the year and the district received a Lighthouse School Leader award for Beacon School District. Photo by Cathy Cook.

The District previously had two school resource officer positions, one of which is paid by the school while the other was funded by the District and the city of Poplarville, said District CFO Samantha Sandifer.

The city hired for the second position, but due to a low number of police officers and the police department trying to cover the city streets, there have been no officers available for the school resource officer position since October, said Sandifer.

During Monday’s meeting, the Board approved a motion to terminate its agreement with the city of Poplarville for funding the second resource officer position. The District receives grants from the Mississippi Department of Education to pay for the second officer position. Since the position has been vacant, the District needs to return those grant funds, so it needed to terminate the agreement with the city in order to return those funds, said Superintendent Konya Miller.

The remaining resource officer is full time and visits all of the campuses, said Sandifer. Sandifer also noted that there are police officers available within minutes of the schools if needed.

In a separate matter, the School District received a Lighthouse School Leader award for Beacon School District for having an A rating with no schools below a C in the district.

In a separate matter, the Board heard updates on student progress at the Poplarville Upper Elementary School. In each class, teachers are being asked to select five students in their class who need the most help and work with them in small groups during in class tutoring, said Principal Loletha Needham.

—Named interim Poplarville Upper Elementary Principal Loletha Needham principal for the remainder of the school year and for the upcoming school year.

—Approved an addendum to test security guidelines that provide allowances for students that need to use technical devices during testing, for instance if a student needs to use their cellphone to operate an insulin pump.

The next School Board meeting will be April 13 at 6 p.m. in the district’s Central Office.

Members of the Picayune School District’s Board of Trustees elected new officers and heard about achievements during Tuesday’s meeting. This... read more