Poplarville School Board recognizes administrator and director of the year 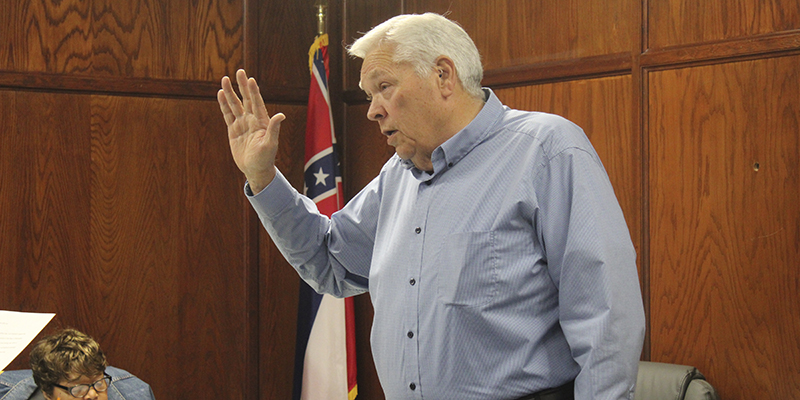 New Poplarville School Board of Trustees member Clelly Farmer takes his oath of office Monday. Farmer was appointed by the Pearl River County Board of Supervisors on March 2 and replaces former Board member Lisa Graves. Photo by Cathy Cook.

The Poplarville School Board of Trustees recognized the administrator and director of the year during Monday’s meeting.

Creel began his employment in the District as a school resource officer in 2017 and became transportation director in 2018, said Superintendent Konya Miller. Creel said he was humbled by the award and that the recognition was a reflection of the team around him.

Principal Jon Will is in his 17th year as a school administrator, said Miller. During his tenure at Poplarville High School, the graduation rate has increased from 81.7 percent to over 90 percent and the composite ACT score has increased from 17.8 to 19.6. Will said the school serves a great community, and he is fortunate to work there.

In a separate matter, new School Board member Clelly Farmer took his oath of office. Farmer was appointed to the School Board by the Pearl River County Board of Supervisors on March 2. He worked as a barber for 53 years, taught barbering at Pearl River Community College and serves on the Mississippi Board of Barber Examiners.

—Approved the restraint and seclusion report. One first grader was restrained in February.

—Approved advertising for the demolition and disposal of the house at 1343 South Main St. According to previous coverage, the District purchased the property for $150,000 in January for the land. The building does have asbestos, which will have to be properly removed before the District can do anything else with the property, said Sandifer.

—Approved a $40,729 service agreement with the Mississippi Power Company for the repair of light poles damaged during tropical storm Olga in October.