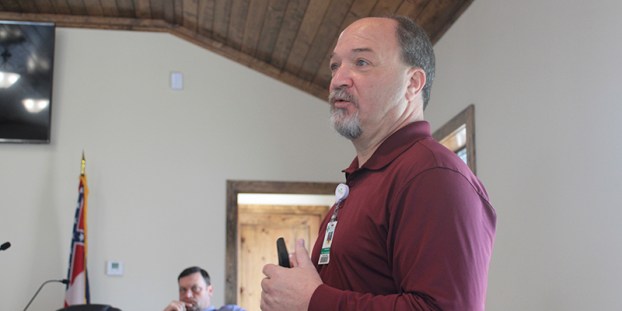 Regional hospital administrator Bryan Maxie recommends the county cancel and close as many gatherings of people as they are legally able to so that the county can slow the spread of COVID-19 at an emergency Board of Supervisors meeting Monday. Photo by Cathy Cook.

Local hospitals are limiting visitors and asking county residents to take precautions to slow and limit the spread of COVID-19.

“This is the most serious health crisis that’s hit America in our lifetime and if we don’t flatten the curve, we’re going to have a lot more people really, really sick,” Dr. Angela Jones with Forrest Health told the Pearl River County Board of Supervisors during an emergency meeting held Monday morning.

While 80 percent of people infected with the virus have mild symptoms, the other 20 percent can develop more severe symptoms and may end up on ventilators, said Jones. COVID-19 is much more contagious than the common cold or flu. While someone with the flu is likely to infect one person around them, it’s believed that someone with COVID-19 is likely to infect three people around them, said Jones.

Medical personnel expect a spike in the number of cases, but the community should take preventative measures such as staying home, washing hands frequently and utilizing social distancing to try to curb that spike and spread it out over time, said Dr. Jones.
“People are going to get sick. What we in the healthcare field are trying to do is flatten the curve,” said Jones.

Preventing people from catching the virus and slowing down the spread of the virus are vital to keeping the healthcare system from becoming overwhelmed, said Highland Community Hospital Regional Administrator Bryan Maxie.

As of Monday, there were 12 presumptive positive COVID-19 cases in Mississippi, two of which were in Pearl River County, according to the Mississippi State Department of Health. One case previously reported in Pearl River County was actually found to have occurred in a Hancock County resident. There are also cases in Copiah, Forrest, Hinds, Leflore and Monroe counties.

The hospitals want to keep people out of the emergency room when possible, said Maxie. The CDC recommends staying home and calling a health provider when someone develops symptoms like fever, cough, or difficulty breathing. People with severe symptoms like persistent pain in the chest, bluish lips or the recent onset of confusion should seek care immediately.

Jones said the proximity to New Orleans has an impact on Pearl River County, because county residents often visit the city and New Orleans has high per capita rates of infection for the U.S. Her advice is to avoid traveling, attending public events and going out.
As of Monday morning, there were 114 COVID-19 cases reported in Louisiana, 79 of which were reported in Orleans Parish, according to the Louisiana State Department of Health.

The hospital began limiting visitor access to one patient per visitor at Highland Community Hospital and the Pearl River County Hospital and Nursing Home last week, and will probably go down to no visitors for patients this week, said Maxie. Limiting access to the facility is a precautionary measure to protect staff and patients.

Forrest Health put nursing homes on lockdown last week, with zero visitors allowed, said Maxie. While not allowing visitors is trying on families, it is the right thing to do to protect the elderly population in those nursing homes, he said.

Highland Community Hospital and Pearl River County Hospital are currently well staffed, said Maxie, but the further the disease spreads, the more precautions will have to be taken. All hospital staff report their temperatures twice a day. If any staff members have a fever they are sent home. If staff members develop any symptoms of COVID-19, they are supposed to self-report and leave work immediately, said Maxie.

The hospitals are postponing any appointments that can be postponed, like wellness visits, and limiting some elective cases, said Maxie.

Maxie said that the hospital has tests for COVID-19, but he is not comfortable that those tests will not run out. The hospitals began transporting their own COVID-19 tests to the state lab, in order to get results from the tests more quickly.

Additionally, over 1,000 items on the hospitals purchasing list that are considered critical to caring for COVID-19 cases are on back order from suppliers. This includes items like gowns, masks and cleaning supplies. Healthcare facilities are put on allocations by their suppliers based on how many supplies the facilities used in the last 12 months. However, the hospitals are making request to MEMA and FEMA to get more protective supplies as needed, said Maxie.

“Panic is probably the worst thing that’s hurting us right now, and the unknown,” said Maxie.

The hospitals are posting updates once a day on their social media and are looking into setting up a help line. The state has a Mississippi Coronavirus Hotline, 877-978-6453, which operates 8 a.m. to 5 p.m. on Monday through Friday.

A $50,000 grant from the Mississippi Power Foundation provided to Picayune Main Street is being used to beautify the downtown... read more