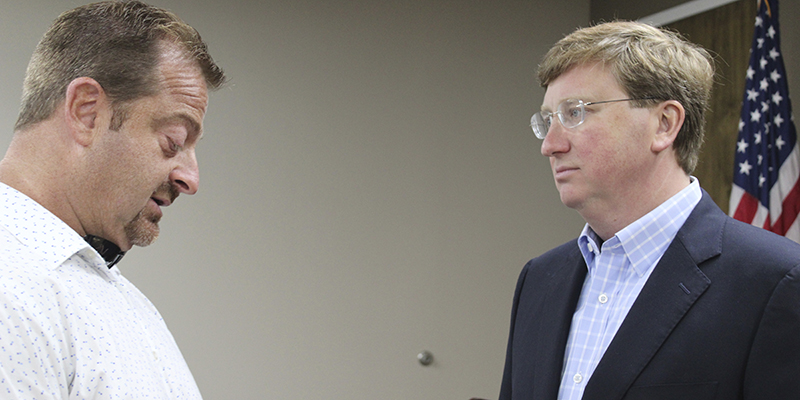 In this file photo, Governor Tate Reeves listens to District V Supervisor Sandy Kane Smith at a stop in Picayune during Reeves campaign for the governor’s office. Reeves issued a clarification to his executive order 1463 on Thursday that made it clear the local government restrictions on businesses to slow the spread of COVID-19 can remain in place.

City and county measures to prevent the spread of COVID-19, like requiring restaurants to close their dining rooms, will remain in place, despite some confusion over an executive order issued by Governor Tate Reeves Tuesday.

Reeves provided clarification on executive order 1463 on Thursday. Reeves original order stated that additional social distancing limitations issued by municipalities on essential businesses that would be in conflict with his executive order would be unenforceable. However, the supplemental order Reeves issued makes it clear that local governing bodies can make stricter restrictions than those listed in his executive order.

Pearl River County, the city of Picayune and the city of Poplarville all have told restaurants and bars to stop dine-in service until further notice in orders issued Monday.

Poplarville Mayor Rossie Creel said on Thursday that he expected the executive order he issued on Monday restricting some local businesses’ activities to limit the spread of COVID-19 would have to be adjusted to comply with the governor’s order. Since Reeves issued the clarification, the order will not need to be changed, Creel said on Friday.

The Legislature will not be retuning on April 1, as previously planned, unless a situation develops where it would need to pass emergency legislation, said Representative Stacey Wilkes.

MEMA still has sufficient funding to last the next two to three weeks, which allows the Legislature’s return to be postponed, she said. If at some point legislators need to go back for funding, they will, said Wilkes.

If the Legislature comes back and needs to complete the session, budgets are something that will be heavily discussed, said Wilkes.

“When we come back, the first thing is if there is any money that needs to be appropriated to keep things moving. That will be first and foremost,” she said.

Wilkes said many of the big questions about what support is needed for people who have been laid off or for struggling businesses are unanswered, because the total economic impact of the pandemic is still unknown.