Student performance discussed by Board of Trustees 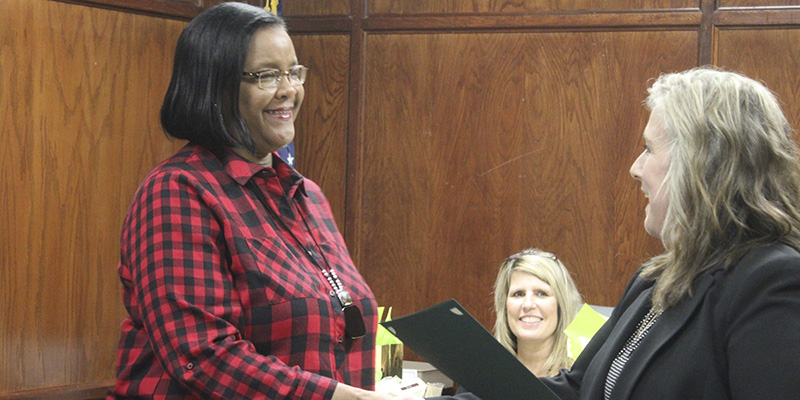 Superintendent Konya Miller recognized the Poplarville School Board of Trustees for their work during the Board meeting Monday. Photo by Cathy Cook.

Principals from Poplarville Upper Elementary and the Middle School of Poplarville discussed how they are working to improve their schools’ performances at the Poplarville School Board of Trustees meeting held Monday.

Poplarville Upper Elementary was ranked a C in the 2018 to 2019 school year, which was a 38-point decrease from the 2017 to 2018 school year when the school was ranked a B, said Principal Loletha Needham.

Student scores decreased in math, so the school has been doing a power half hour for math tutoring along with a power hour for tutoring reading students, said Needham. The science score also decreased. Teachers gave students science practice assessments so those scores can be used to get students up to par. Teachers also met with students about their beginning and midyear data, and students offered input on what they can do to help themselves score better, said Needham.

In a separate matter, CFO Samantha Sandifer discussed the district’s audited financial statements for the fiscal year that ended in June 2019 and the December 2019 financial reports.

Over half of the District’s revenue comes from state sources, and most local revenue comes from ad valorem taxes, said Sandifer. The 16th section land revenue was small in the last fiscal year because there were no timber sales. Approximately 66 percent of expenditures are instructional or instructional related, and the goal is to have approximately 60 percent of expenses be in that category, said Sandifer. December is when the District has the lowest funds because ad valorem taxes begin to be collected in January. The Board approved the audit and the December financial reports.

—Approved advertising four portable classrooms at Poplarville Middle School for sale. The classrooms have been at the school since Hurricane Katrina and the District no longer needs them, said Superintendent Konya Miller.

—Approved cashing in a Conoco Phillips Stock for Career Technical Education. The stock was previously awarded as a prize for competition in DECA, but has not gained in value for a long time, so the group wants to cash in the stock to use toward travel expenses.