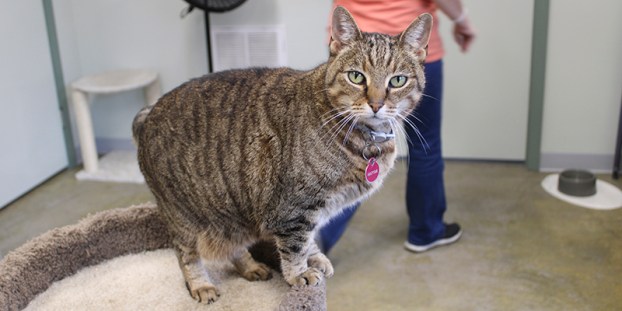 The PRC SPCA’s new cat rooms enabled the shelter to upgrade cages for the cats. With increased space for the cats to live in, the shelter has seen a reduction in respiratory infections in the cats. Photo by Cathy Cook.

SPCA will show off renovations with open house

The Pearl River County SPCA staff and volunteers want to show off new renovations and expansion during an open house set for Saturday Feb. 15 from 10 a.m. to 4 p.m. The shelter will also offer coupons for reduced price spay and neuter procedures, and reduced adoption fees.

The addition built a cat room and renovated the dog runs, said SPCA spokesperson Maria Diamond. The new cat room benefits the health of felines kept at the shelter and gives the staff space to separate cats that are ready for adoption from cats that have just arrived at the shelter, said Diamond.

“They have a better environment now, and they’ve got nice windows where it’s sunny and light in there,” Diamond said.

The renovated dog runs were completed in the last few weeks, while the cat room was a long-term project that began last year and was completed several months ago.

Adoption fees will be reduced that day to $40 for most dogs and $30 for cats and kittens, and 150 low price spay and neuter coupons will be available.

“We’re hoping people will come out and tour our shelter and see how hard we’re trying to make it friendly to the public,” said Diamond.

The shelter stays at capacity and staff are trying to make it a no kill shelter, which is why the PRC SPCA asks people to call and make an appointment before bringing an animal in, said Diamond.

“This is especially important during kitten season, because we get hundreds of kittens in,” said Diamond.

The event gives the shelter a chance to share its improvements with the public, said Diamond.

A presentation from the new economic director for Pearl River County may have changed the Council’s mind in providing funding... read more