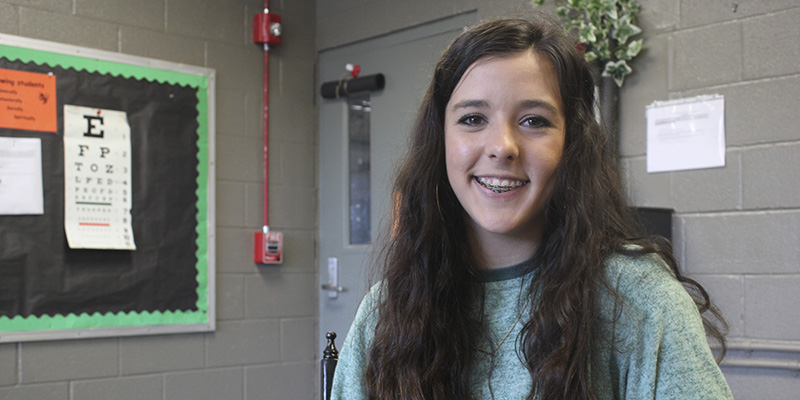 Poplarville High School student Ravyn Garrett is one of 113 Mississippi students selected as candidates for the Presidential Scholar Program. Photo by Cathy Cook.

One Poplarville High School senior has been selected as a candidate for the 2020 U.S. Presidential Scholars Program.

Statewide, 113 students were selected as candidates for the national award, according to a press release from the Mississippi Department of Education. The program began in 1964 and each year recognizes up to 161 high school students across the nation as Presidential Scholars. The selected candidates have the opportunity to apply for the program with essays, self-assessments and transcripts, the release states.

“We are very proud of our 113 student candidates for the 2020 U.S. Presidential Scholars Program and encourage them to complete the next phase of the process by returning all of the application materials they received from the U.S. Department of Education. This is a great honor and showcases the tremendous talents of our graduating seniors in Mississippi,” said Dr. Carey Wright, state superintendent of education.

Poplarville senior Ravyn Garrett was surprised to be selected as a candidate.

“This has made me realize my potential and made me grateful for all of the opportunities the school has given me,” said Garrett.

Garrett really wants to attend Ole Miss, but as a twin she knew it would be challenging for her family to help her and her brother pay for college. So, she’s worked hard in school, hopeful that she will receive scholarships to pay for college.

Garrett is involved in almost every club available at Poplarville High School and is an officer in all four academic clubs: Beta, DECA, Student Council and NTHS. Although she sometimes takes on more than she can handle, being involved in the school’s clubs has helped Garrett make new friends. The groups also give her opportunities to make a difference, like on Tuesday when the Student Council visited the nursing home with valentines and stuffed animals.

Garrett’s teachers are excited for her, including math teacher Jacqrin Dodge who taught Garrett Algebra 2.

“She always had a smile on her face and a great attitude. She made a 100 for my class, worked hard and always helped others that were struggling,” said Dodge via email.

Another of Garrett’s math teachers, Patsy Hughes, described her as a model student always driven to do her best. Teacher Hope Roberts said via email that Garrett has shown her commitment to success through hard work and dedication to her classes.

To Garrett, attending Poplarville High School has made it easy to achieve, because students receive so much recognition and support for their academic achievements.

“I’m really grateful for this high school, because they do a really good job of recognizing students,” she said.