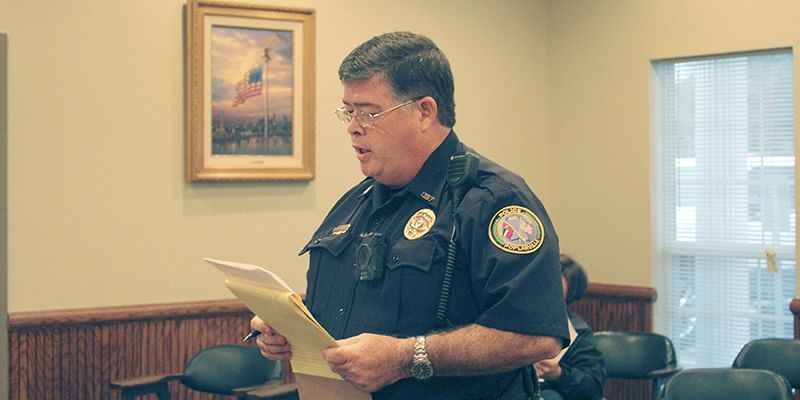 officers needed: Poplarville Police Chief Greg Hartley speaks to the Board of Aldermen during a recent meeting. Thursday, the Board met to decide whether to terminate a full time officer. File photo by Cathy Cook | Picayune Item

The Poplarville Board of Aldermen met for a special called session Thursday to discuss personnel matters in the police department.

After executive session, the Board passed a motion to terminate full time officer Nicole Verner, effective immediately, said City Clerk Jane O’Neal. Verner was hired in November, according to previous coverage. Both Mayor Rossie Creel and Chief of Police Greg Hartley had no comment on the termination.

“I think it’s difficult for all law enforcement agencies these days to fill positions. I think in one regard people are just not as interested in being a police officer as they used to be. It’s a very demanding position that requires a lot of training, in addition to the danger inherent to the job,” said Hartley.

The department offers competitive pay for law enforcement in the county, said Creel, and has tried to attract more officers by implementing a take home car policy. The policy was implemented in October and allows officers to take home their patrol vehicles, according to previous coverage. Other agencies within the county already had similar policies, said Hartley.

Hartley said that he is aware other law enforcement agencies within the county also have similar struggles recruiting officers.

“The city of Poplarville continues to maintain full law enforcement coverage 24 hours a day, seven days a week,” said Creel. “There’s not a shortage in coverage. We may be short some officers, but the guys who are there are stepping up and taking extra shifts.”

Both Hartley and Creel said they have no concerns about officer burnout, because part time officers are helping to cover shifts and the officers currently employed have many years of experience.

“They understand the dedication it takes and the commitment it takes,” said Creel.

The Board wants to get the officer positions filled as quickly as possible, said Creel.