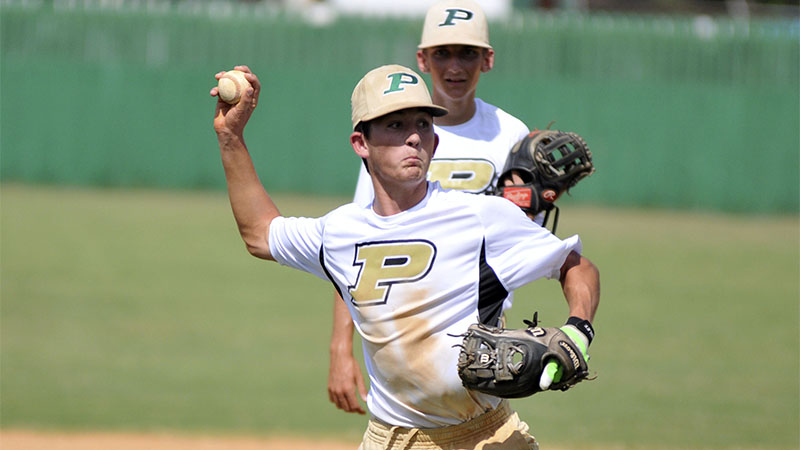 Jonathan Mitchell | Picayune Item To first: Junior Quentin Baker fields a ground ball and prepares to throw it to first base. Baker plays second base and is a pitcher for the Hornets.

The season is fast approaching for the Poplarville Hornets baseball team and to kick things off the team will take part in a jamboree on Feb. 15.

Before the jamboree, the team will have an intra-squad scrimmage Feb. 8 to help prepare the athletes for their first taste of competition.

Head Coach Slade Jones said the players have spent a lot of time at the plate working on their weaknesses, while also getting significant time on the field.

Several athletes have joined the team from other sports, so the squad is large enough to field essentially two full teams.

This has led to the emphasis during practice sessions being about getting as much “live” action as possible, meaning the practices mimic game like situations, while still working on the technical side of baseball. “We haven’t gotten away from those things, we talk about them on a daily basis. Right now we’re more focused on live play, a lot of intra-squad stuff,” Jones said.

Inclement weather has kept the team off the dirt, but the players are still finding ways to improve even when they can’t be on the field.

As the season draws near Jones and his staff have been working on finding the best positions for certain players.

Jones said the team has a lot of flex athletes, players who can succeed in multiple positions, so the challenge has been narrowing down the position(s) each athlete will play.

Pitching has an affect on who starts where on the diamond, but Jones said for the most part the athletes know what spots they’ll play come the start of the season. “We’ve narrowed it down, we have a better understanding (now). Instead of three spots we have it narrowed down to where we have guys in just one to two spots,” Jones said.

Poplarville is coming off a season in which the team won 21 games and made a deep playoff run. The success has led to elevated expectations inside and outside the clubhouse.

Jones said there were some young players who were thrown into the deep end last year with little pressure on their shoulders.

However, due to the team’s second place finish in the district last year, every player is now expected to have similar performances this season.

“A lot of it will be the ability to handle success and do well with the expectations. Things that were acceptable in the past are no longer acceptable. Everybody expects them to win,” Jones said. Getting the little details right and having everything prepared before the start of the season is paramount.

The start of competitive play is on the horizon for the Hornets, so getting things nailed down in practice now could lead to a hot start.

Jones said every aspect of the game would be covered in the coming days as the team prepares for the start of the season.

“We’ll go back and polish up on everything, first and third situations, bunt coverages and walk through bullpens,” Jones said.