Picayune football players moving to the next level 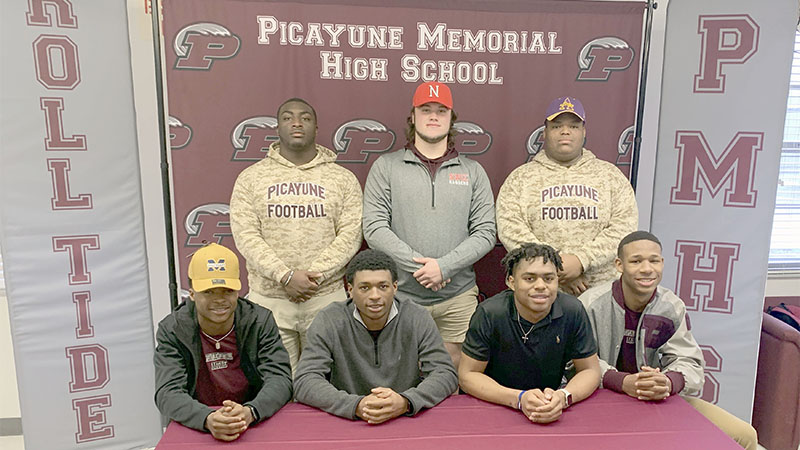 Wednesday, seven Picayune Maroon Tide football players signed with a college to compete at the next level.

Deonta Reed, who played on the offensive and defensive lines for Picayune, signed with Alcorn State University.

Elijah Jenkins, who played on the defensive line for Picayune, signed with Pearl River Community College.

Jay Mickle, who played on the offensive line for Picayune, signed with Northwest Mississippi Community College.

Having seven athletes move on to the next level is no small feat and speaks to the work the players put in.

Head Coach Cody Stogner said that not only do the signees have talent on the field, but they also took care of business off the field.

“They have to have good grades with their skills. They’ve shown that and they’re being rewarded for that. It’s not so much what the football program has done for them, but what they’ve done for us,” Stogner said.

The dream of moving up into college football is something that could be shared by other players in the locker room.

Young athletes see the hard work put in by the signees and understand what it takes to move up.

“I just hope that they can see it’s a reality. (If) you put work in on the field and in the classroom anything is possible. I think it’s big time motivation for younger guys to work harder,” Stogner said.

The signees were part of a football team that competed for a 5A state championship this past season so the players know what it’s like to be successful. Coaching is a part of that, but Stogner said the players deserve all the credit for the work they put in.

“Us coaches are just a small part of everything. These guys have put in the work not only on the field, but in the classroom. They put themselves in situations to be successful,” Stogner said.