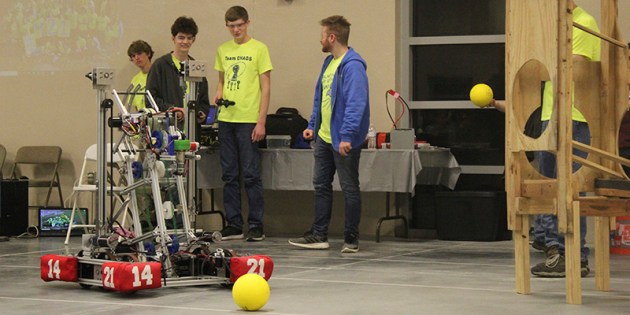 Ready to compete: High school students on Team CHAOS demonstrate their robot’s abilities at an open house Thursday. The team will travel to Arkansas for a regional competition next week. Cathy Cook | Picayune Item 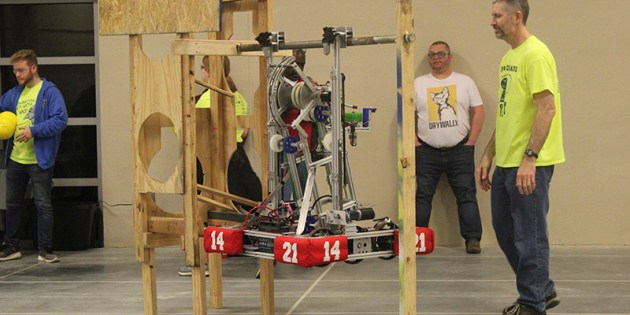 Hanging in there: Team CHAOS demonstrates their robot’s ability to lift itself off the floor and hang from a bar during an open house Thursday night. Cathy Cook | Picayune Item 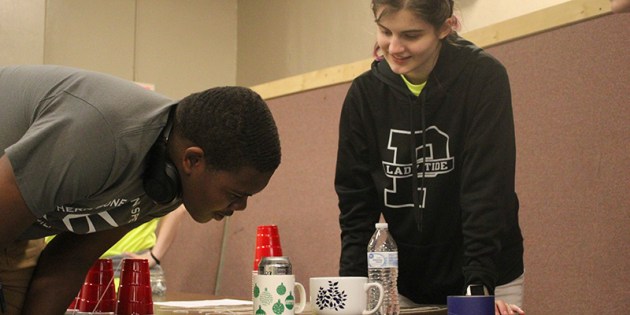 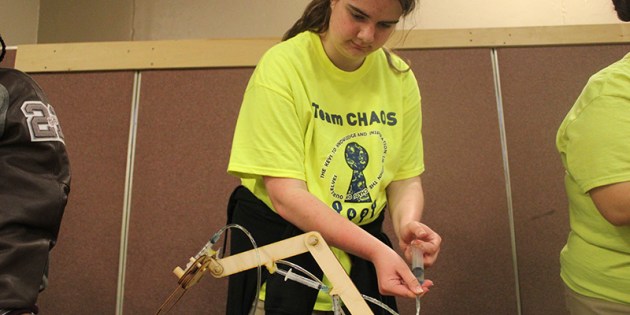 Team CHAOS demonstrated their robot’s abilities at an open house Thursday at Picayune Memorial High School. The robot is equipped with the ability to collect and shoot balls and is able to grab a bar and lift itself off of the ground. Students controlled the robot’s navigation, while a student and one of the team’s mentors rolled yellow balls across the floor.

The robot had some issues throwing the balls, but after a readjustment, it sent them flying across the room, eliciting applause from an audience of family and friends.

The For Inspiration and Recognition of Science and Technology robotics competition offers a new game every year for teams of high school students to compete in. There will be 4,000 teams from 35 countries in the 2020 competition.

The 2020 game tasks teams with protecting a fictional city from approaching asteroids. The teams must collect “power cells,” represented by the yellow balls, to activate a shield generator and protect the city. The required tasks include having the robot read a color wheel, getting the robot to lift itself off of the ground to hang onto a bar and move across the bar.

Team CHAOS demonstrated that the robot built by mentors and team members is capable of lifting itself, but the students are still working on getting it to move across the bar.

Junior Kailey Travis helped with the build for the first time this year. She helped with the construction of the device that shoots balls and the robot’s drive train. The team has opted for a belt driven train in this year’s competition so the robot has more traction, said Travis.

Being part of Team CHAOS gives students lots of opportunities to learn mechanical and carpentry skills through construction of the robot or the obstacles it interacts with, said junior Drew Helgerson.

“It’s great to see people that didn’t come from a mechanical background get that experience,” said Helgerson.

“I joined because friends asked me to join, but I stayed because it’s teaching me a lot,” said freshman Carolyn Delancey.

Delancey was one of the students running science demonstrations at the open house.

The demos showed attendees simple examples of air pressure, inertia and even hydraulics.

Student Maggie Lavigne demonstrated a hydraulic arm designed by one of her friends and cut out of wood, with plastic syringes and lines that provided the arm’s hydraulic movement.

Being on Team CHAOS is “really cool,” because students learn how to use different tools to solve problems, said Kalyia Hathorn. During the open house, she demonstrated inertia with a plastic cup full of beads.

As many students emphasized, they also learn about sportsmanship and being part of a team.

“Even opposing teams will help each other out,” said Lavigne.

After Arkansas, the team will have a few more weeks to tweak their robot before the Bayou Regional begins on March 25, which is held in New Orleans.