Work to widen US 11 delayed 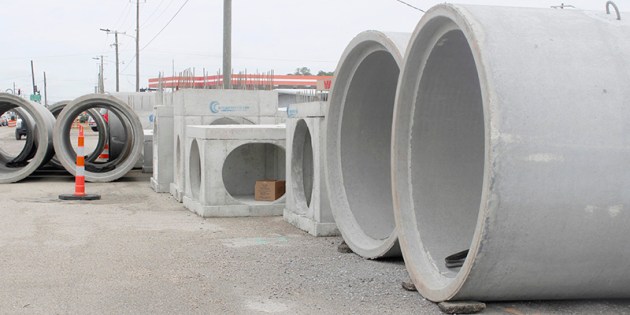 Motorists may have noticed these large concrete structures along Highway 11 recently. They are components for a drainage system that will be installed as part of the Mississippi Department of Transportation’s project to widen Highway 11. 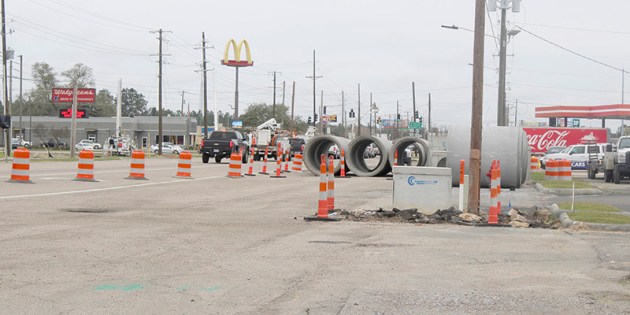 The Highway 11 widening project has met with delays due to wet weather and ongoing utility relocations.

The project has made some progress since traffic was tapered down to two lanes on Highway 11 from Cayten Street to Lakeshore Drive in January. Mississippi Department of Transportation engineer Dexter Childs said it may not look like much has happened, but progress has been made on the project.

Drainage structures have been delivered and the contractor is doing prep work to install those structures. However, continued work to move utilities has slowed the drainage work, as has wet weather, said Childs.

The city of Picayune completed most of the gas and water line relocation in early January, said Public Works Director Eric Morris. The only work remaining for gas and water relocation is cleanup, which means the pouring of concrete and asphalt patching. The concrete pouring occurring in front of Phillips Building Supply is part of that utility relocation effort, and the cleanup work should be done by the first or second week of March, said Morris.

For the past two weeks, Coast Electric has had two crews working on relocating power line poles for the expansion from the Highway 11 and Highway 43 intersection down to the Hide-A-Way Lake entrance, said April Lollar, Director of Communications. Due to the weather, there is not a timeline for when that utility relocation work will be complete. However, extra crews from Harrison and Hancock counties have been assisting in the effort to speed up the process, said Lollar. Safety is especially a concern for crews at the Highway 11 and Highway 43 intersection, because it is so busy.

Mississippi Power expects all of its utilities to be relocated by mid-March, weather permitting, said company spokeswoman Kaila Moran. Mississippi Power is working on utility relocations from Stemwood Drive to Cayten Street and began work on them in September, said Moran.

Relocation of the city’s sewer lines is mostly complete. Pearl River County Utility Authority Executive Director Cliff Diamond said one of the final items to complete in the installation of a new pump station near where Sonic is located to help drive the flow of sewer services from Hide-A-Way Lake to the treatment plant on Neal Road. The equipment needed for that work arrived on Tuesday.

Installation of drainage structures is expected to begin within the next few weeks, but the timeframe for beginning that work is dependent on weather, said Childs. He said it is difficult to put a timeframe on how long installing the drainage structures will take, because it relies on a lot of factors, like how many crews are used.

Once crews begin drainage structure installation, there will be multiple crews working along the blocked east lane of Highway 11.

Tapering traffic down to two lanes back in January was important, in part to get drivers accustomed to the new flow of traffic, Childs said. However, the tapers have already been adjusted because the locations where people were turning was wearing off striping on the road.

Traffic will not be shifted again for at least a couple of months, said Childs. In that time, the goal is to have everything possible completed on the east side of Highway 11. Before traffic is shifted again, the contractor should complete some concrete work, drainage work, put up temporary traffic signals and have some paving completed.

A second phase of the project, which will include constructing a new bridge over East Hobolochitto Creek, is slated to begin after widening of the highway is complete.