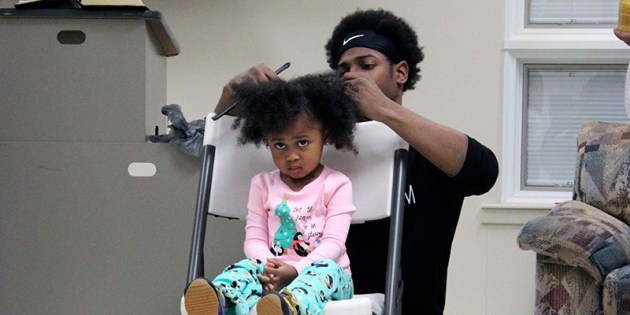 Bonding time: Devonte Bowens demonstrates how he styles his daughter Trinitie’s hair during a Fatherhood Initiative meeting Thursday. Learning to style her hair has made Bowens more patient with his daughter, he said. Cathy Cook | Picayune Item 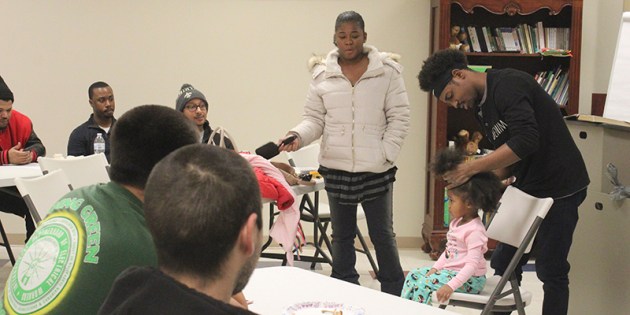 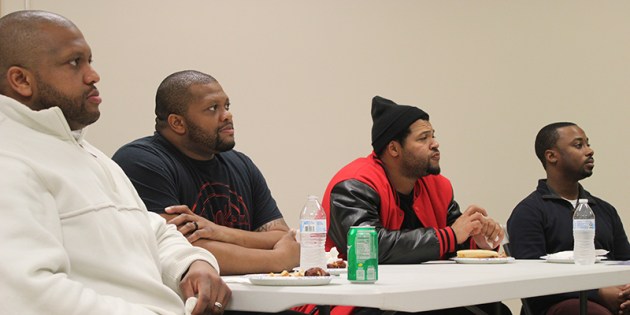 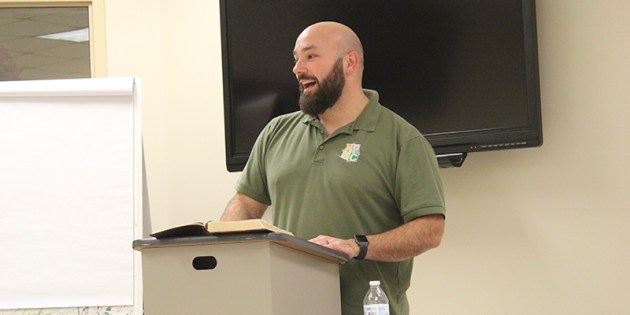 On Thursday, Trinitie Bowens sat quietly with her hands in her lap while her father Devonte Bowens carefully parted her hair. A room full of fathers watched while Bowens created a simple three-ponytail hairstyle for his daughter. While Bowens brushed and gelled, the men listened to his wife Jasmine Carter explain the intricacies of caring for her daughter’s hair.

The hair care demonstration was part of this month’s Fatherhood Initiative meeting. The meetings, held at Picayune Early Head Start on Rosa Street, are open to all fathers and father figures in the community.

“Our dads want to be really good dads, and they’re willing to put in the work to do it,” said Pastor Josh Braddy, who leads the meetings.

During meetings, the men share their parenting questions and concerns. The meetings offer men ideas about how to give their children emotional and spiritual support, said Braddy.

“We believe if the dad is better, then the family group is better,” he said.

At Thursday’s meeting, the men shared ways they spend time with their children that engage them emotionally and spiritually, like singing, sports, dancing and fixing things together. Braddy shared a list, based on ideas from mothers in the community, of more ways that dads can spend time with their kids, like bath time, dress up, finger painting and grocery shopping.

The group also had a discussion about supporting mothers financially and paying child support. After voicing their concerns and ideas, the group watched the hair care demonstration.

Cater showed different types of brushes and explained the importance of brushing hair out by starting at the end instead of the root.

“Do not feel intimidated the first time you do your daughter’s hair,” said Carter.

The men had plenty of questions, like what Carter’s thoughts were on perms, how to handle a tender headed child and how the parents taught their young daughter to sit so still while her hair was being styled.

Carter suggested making hairstyling a relaxing experience, by putting on a kid’s favorite TV show and settling them in with a snack. Bowens said that when he first learned to do Trinitie’s hair, it was rough, but now it offers them extra time to bond and talk about her day.

“It helped me learn how to be more patient with my daughter,” said Bowens.

Although he was part of a demonstration Thursday, Bowens is a regular Fatherhood Initiative attendee. He’s been coming to the meetings for two years, and said every meeting is a learning experience.

“I love that he’s able to have a good support system,” said Carter.

The meeting closed with a scripture reading and prayer.

For more information on the Fatherhood Initiative, contact Early Head Start at 601-799-4702 or attend a meeting at the campus, located at 1620 Rosa Street in Picayune.