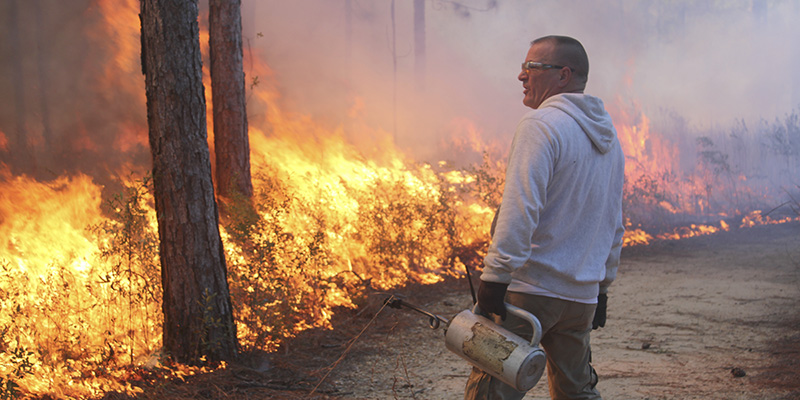 Burn manager Terry Johnson monitors flames during a prescribed burn at the Crosby Arboretum Thursday. Johnson kept watch on the weather for weeks to find an optimal time for the prescribed burn. Photo by Cathy Cook.

Picayune residents may have noticed smoke coming from the Crosby Arboretum Thursday morning, which was part of a prescribed burn.

Grounds Supervisor and certified burn manager Terry Johnson has been watching the weather for weeks, looking for an optimal moment to have a dormant season burn. The goal of the burn was fuel reduction and to maintain a wet pine savannah.

The fire kills plants that block out light, allowing the fire dependent plants that need full sun to flourish. Within three weeks after the burn, flower heads for yellow topped pitcher plants should be visible in the savannah, said Johnson.

While other trees are killed by the prescribed burns and will have to start again, the longleaf pine is a fire survivor with scaly bark that protects it from fire damage, said Johnson.

Before beginning a burn, Johnson notifies local authorities and puts signs along the roadside, so passersby know they don’t need to call the fire department about the smoke billowing from the Arboretum grounds.

Before igniting their fire, Johnson double-checked the direction of the northwest wind. The crew began the fire at the southeast corner of a stand of long leaf pines so that it could back into the wind.

The small fire crew, made up of volunteers and Mississippi State University Extension Service employees, broke into two teams that used ignition torches to box the fire in, and had water hoses on hand to manage the flames.

Thursday was volunteer and master gardener Carmen Ulfers’ first burn. Moving the heavy water hoses was hard work, but makes for a good workout, she said.

“I love it, and it’s good for the wildlife and for the waistline,” said Ulfers.

The Arboretum may conduct another prescribed burn Friday, if the wind and weather conditions are right.