Community will have chance to learn about service dogs 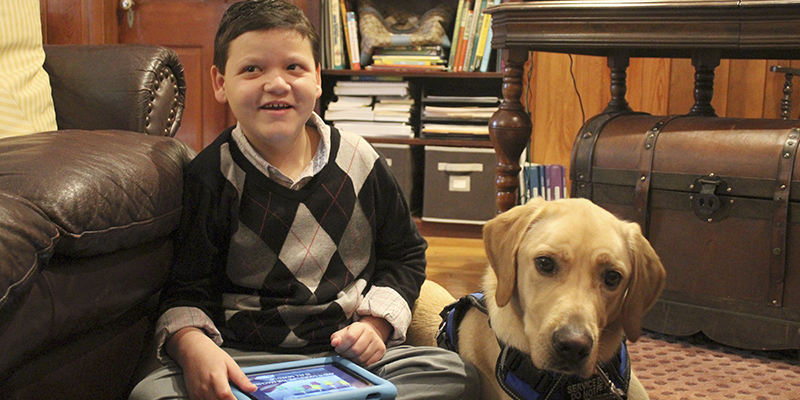 Eli Formby sits with his service dog Prescott. The service animal is being trained to assist Formby during his seizures.

When locals realized 12-year-old Eli Formby could benefit from a service dog over two years ago, they stepped up to help fundraise for the acquisition of that animal, and now the community will have the opportunity to meet Eli’s service dog Prescott and learn about the work service animals do.

Eli Formby had 45 grand mal seizures in the last 32 days, said his father Mark Formby. The 12-year-old’s first seizure occurred when he was 18 months. His mother, Rita Formby, is an ER nurse by trade, and knew that when he was an infant something was wrong before the seizures began. Eli was delayed in walking, and cried often, she said.

Due to his frequent seizures, Eli cannot play unsupervised, or sleep alone and Rita has had to perform CPR on him at home three times. Eli’s service dog Prescott is being trained to alert his parents before a seizure begins and assist Eli during a seizure, which may make it possible for him to sleep alone.

Months before the service dog arrived in the family’s home, Rita sent cheek swabs taken from Eli after he had a seizure, so that the dog could be trained to recognize that as a signal scent. The dog was finally ready to move in with the Formby family in December. Trainers visit twice a week to work with Prescott and the family, said Rita Formby.

Both of the Formby’s children are adopted, and between the cost of adoptions and Eli’s many medical expenses, a service animal seemed financially out of reach.

However, the community stepped up to raise $12,000 to help purchase Eli’s service dog. The family covered the rest of the $32,000 expense, said Mark Formby. The many fundraising efforts included fundraisers held by the Juniorette Diamonds, of which Eli’s 13-year-old sister Rebekah is a member, and lemonade stands run by kids in Eli’s Sunday school.

“How do you repay something like that?” said Rita Formby.

In an effort to thank the community and educate locals about service animals, the Juniorette Diamonds are hosting a service dog event on Wednesday at 4:30 p.m. in the Crosby Commons with trainers from Hub City Service Dogs. The community will be able to meet Prescott and learn from his trainers about the work service animals do and the differences between service, therapy and companion dogs, said Juniorette Diamonds co-advisor Darlene Adams via email.