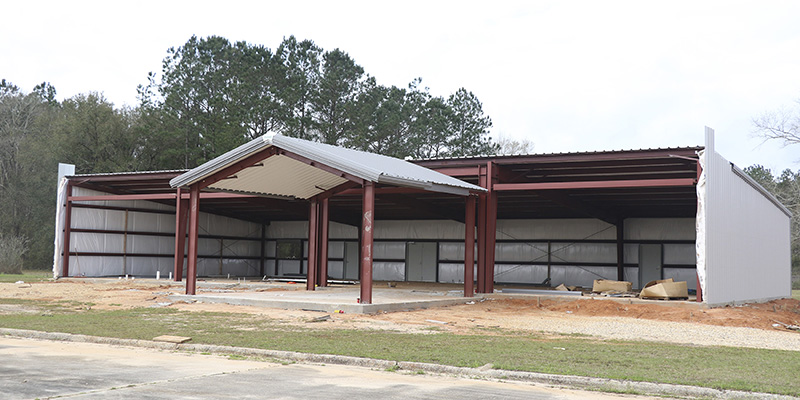 The community center on South Beech Street still needs an exterior wall completed before work can begin on the interior. The building will be used as both a community center and as a voting precinct location for District I.

General contractor J. Patrick Lee said the exterior should be complete within 30 to 45 days. Work to complete the metal work should begin within the next couple of weeks, and then brick veneer work will need to be completed, said Lee.

Lee thinks a reasonable timeframe for the interior would be another four months. Since the project is dependent on the donation of time and money from many people, the pace of construction has been slower than a project like this would typically take, said Lee.

When the exterior is complete, work will begin on the interior, including electrical work, said District I Supervisor Donald Hart.

The Pearl River County Board of Supervisors has provided $50,000 to support the project, said Hart, and the community, including local businesses and citizens, have raised additional funds for a total of approximately $75,000 to support the project. The $75,000 that has been fundraised should be enough to complete the interior of the building, with the exception of furniture, said Hart.

The city of Picayune is helping the effort as well by waiving fees associated with permits for the project, Hart said.

The project still needs an estimated $15,000 to pay for furniture and equipment, said Hart.

Moving the District I precinct to the community center will give the voting precinct a permanent location, which will alleviate the problems created by moving the precinct location around over the years, said Hart. Having a polling location that moves has created confusion in the last couple of elections, said Hart, because people sometimes go to an old polling place after the precinct has changed locations. A permanent location will make it easier for voters.

The community center’s Board has also been in contact with election commissioners and discussed moving more voting precincts to the center.

Along with being used as a voting precinct, the building will be used as a community center and the hope is that people will rent space there to help offset costs associated with the building, said Hart.

The community center will be named after Mary H. Richardson, who has been a strong community advocate and done a lot of work with voters’ rights, said Hart.