Third home demolished by city to be rebuilt 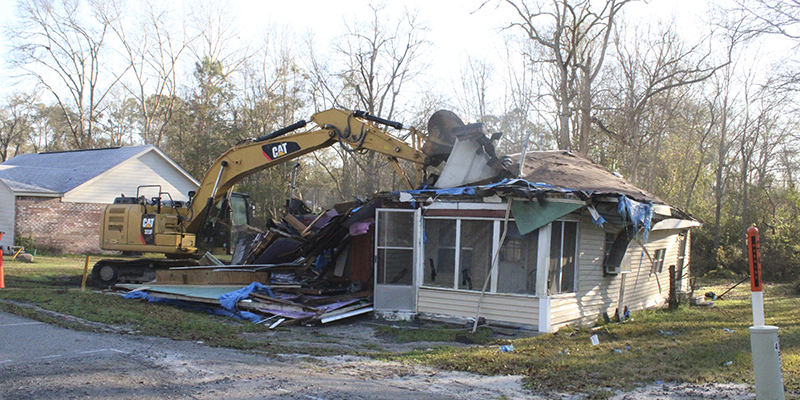 making way: This home on North Monroe Avenue in Picayune was demolished by city employees to provide an open lot for it to be rebuilt with help from Habitat for Humanity. Cathy Cook | Picayune Item

The process to replace a damaged home for one Picayune family continued Friday when the city demolished the old house, located at 404 North Monroe Avenue, so that the lot will be clear for a new home to be built.

The new home’s design has already been approved by the family and by Habitat for Humanity, said Code Enforcement officer Tom Milar. Now that the lot is cleared, fundraising efforts to help pay for the new home’s construction will begin, said Milar. Habitat for Humanity Bay Waveland will help the family coordinate volunteer efforts and fundraising for the home’s replacement. The city’s role in replacing the damaged home is finished now that demolition is complete, said Public Works Director Eric Morris.

The home was damaged 18 months ago when a tree located on the city’s right of way fell on the building’s roof, said Morris. The city is only liable for property damage if it has prior knowledge that a tree is a risk and does not take timely action, said Morris. The tree that caused the property damage had no outward signs of decay and no work orders had been turned in to the city, so the city’s insurance determined it was not liable for the damage.

However, the city wanted to help with the replacement effort, and its legal counsel decided that demolishing the old home to prepare the lot for the new structure would be an equitable way to provide assistance, Morris said.

Along with demolishing the old structure, the city has also provided an elevation certificate through Dungan Engineering, so that the builders will have the proper setbacks when they construct the new house, said Morris.

A number of city departments worked together to make the demolition possible, Morris said.