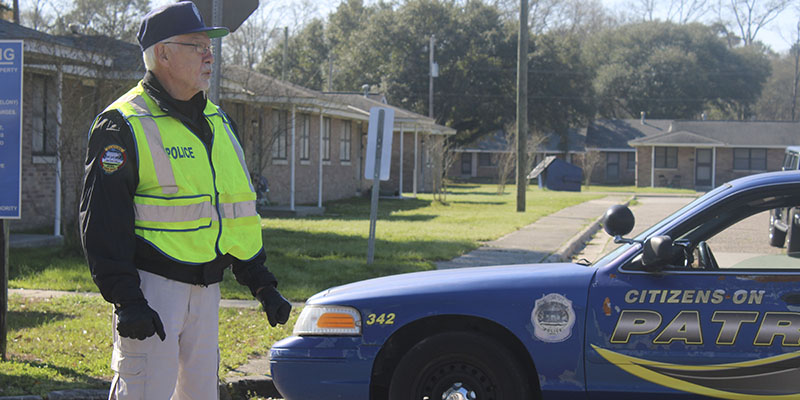 Norman Fenstermacher assists with parade safety at the Early Head Start Mardi Gras parade Friday morning. Fenstermacher is part of Citizens on Patrol, a group that assists the police department at events like parades. Photo by Cathy Cook.

Members of Picayune Police Department’s Citizens on Patrol are looking for new recruits, and age is no limitation, as 92-year-old volunteer Bernard Provenzano demonstrates.

At every parade, some of the volunteers arrive two or three hours early to help prepare for the parade and they are the last car in the parade to help make sure everyone is safe.

The organization also helps volunteers understand the ins and outs of how the Picayune Police Department operates, said Fenstermacher. There are Citizens on Patrol groups in over 13 states, with the Picayune group being established in 2005.

“I like being able to keep my eyes and ears open to help law enforcement do what they need to do,” said Provenzano. “There’s a lot that goes on in this town that people don’t realize.”

When group members see something suspicious or concerning, they notify the authorities, said Provenzano, like when he saw that an area store had forgotten to bring their merchandise inside off the sidewalk after closing and notified the Sheriff’s Department.

Volunteers go through an application process and training program, which includes a background check, riding along with a police officer, spending a day in dispatch, learning about the jail and spending time in a courtroom, Fenstermacher said.

“It’s got to come from the heart. We’ve got to let people know that we’re out there watching for them,” said Provenzano. “Those that can’t do it, can’t do it, but those that can should certainly try.”