Business owners on Highway 11 have mixed thoughts on expansion 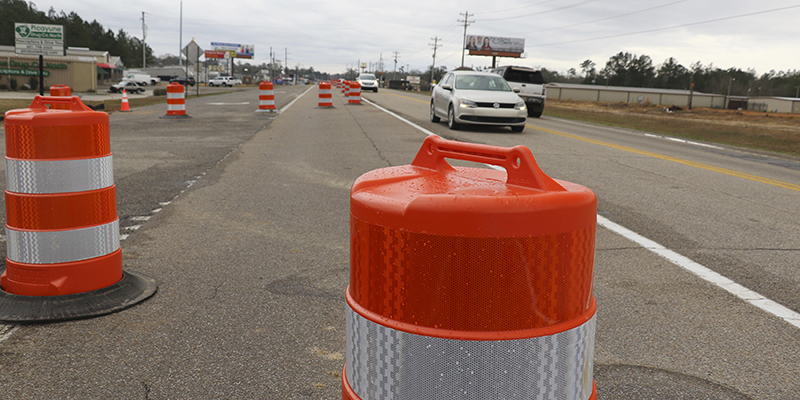 The project to widen Highway 11 is projected to take three years to complete. Photo by Jeremy Pittari

While some local business owners along Highway 11 are excited that the Highway is being widened, others are worried that the construction may drag on.

When Joe Landrum got the building permit for his florist shop in 1969, he was warned the state wanted to widen the highway in front of his building.

“I’ve been waiting 51 years for them to unload the bulldozers. They’re finally there at the corner,” said Landrum.

The first phase of the project, which just started, will widen Highway 11 to four lanes from Cayten Street to Lakeshore Drive. A second phase is planned to begin in the next two to three years that will replace the bridge over the East Hobolochitto Creek. Landrum expects construction from the project to lessen the number of walk-in customers to his business. Landrum’s wife, Helen Landrum, said she would rather see the state invest in improving the county’s back roads rather than widen Highway 11. However, Joe Landrum said he thinks the expansion is necessary, because traffic on Highway 11 often gets backed up.

After seeing the project take so many years to begin, he believes it will take longer than planned to complete.

Owner of Sun Guard Auto Works, Fred Davis, also expects the project to take longer than planned. He feels work to relocate utilities has gone quickly, but is worried work may slow as the state’s contractor begins drainage work.

Davis relocated his business due to the expansion project. He accepted a buyout from the state for the building he occupied for 23 years and relocated along Highway 11 farther away from the East Hobolochitto Bridge. Instead of buying a new building, Davis decided to rent. He does not expect the project to significantly decrease his customers, as most of his business is by appointment.

“I feel like this part of town has needed some revamping,” said Herbert.

However, the Herbert said he will need to figure out how to manage parking, because the business will lose half of its parking spaces to the highway expansion, Herbert said.

Kim Tate, an employee at the bakery Sugar Mama’s next door, is excited about the project.

“I think it’s something that’s really needed, but it’s going to be a long two years for sure,” said Tate.