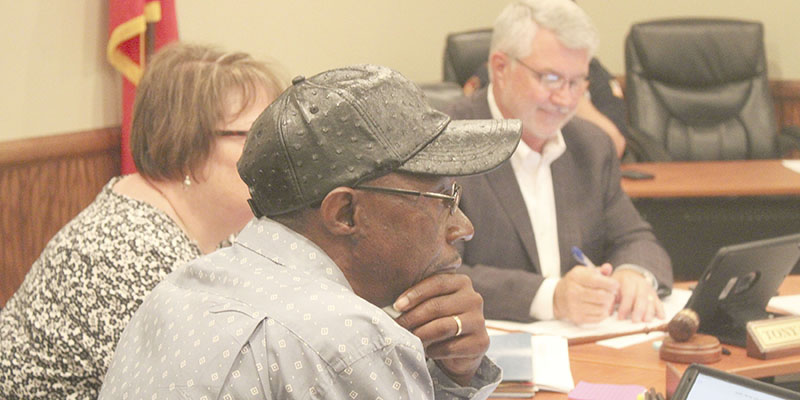 Poplarville’s Board of Aldermen discussed the proposed interlocal agreement for a consolidated E-911 Dispatch Center during their meeting Tuesday and approved hire employees to fill positions in three different city departments.

Police Chief Greg Hartley brought the proposed five year agreement before the Board with a breakdown of prices and the payment Poplarville would contribute to the consolidated system.

At the recommendation of city attorney Manya Bryan, the Board decided to take the agreement under advisement. Bryan said the county attorney had an additional revision for the contract Tuesday, and suggested the Board take time to discuss the specific amount of money that Poplarville will need to contribute to the E-911 system.

During public comment on the matter, the Board heard from Poplarville resident Melvin Henry who said he was concerned because equipment used for drainage maintenance on Martin Luther King Jr. Drive, along with mud from the drainage work, are still in his yard. The Board said they would look into the issue.

Althea Jarvis also asked if there were any updates about the concerns she shared during the Feb. 4 meeting about an accident report from November, as well as her allegations that Alderman Kevin Tillman was dumping trash on private property. Jarvis filed a complaint with the city after the last Board meeting she attended, but the complaint had not been given to the City Clerk prior to the meeting, so the matter was not on the agenda for Tuesday’s meeting.

The Board entered executive session to discuss personnel matters in the police department, public works, City Hall and the Municipal Court.

—Accepted the resignation of public defender Lindsay Watts. Watts accepted a position with the state attorney general’s office, said City Clerk Jane O’Neal. The Board decided to take the matter of appointing a new municipal court public defender under advisement.

The next regular Board meeting will be March 3 at 5 p.m. in City Hall.