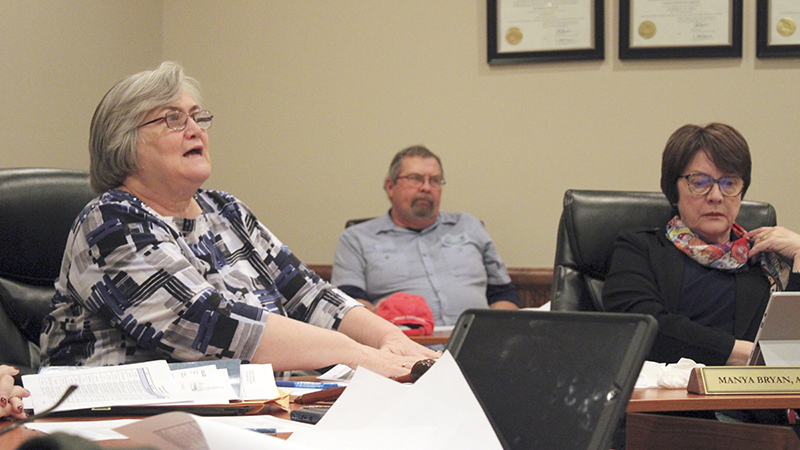 PAVING PROGRESS: Board member Shirley Wiltshire asks questions about paving projects during Tuesday’s regular meeting of the Board of Aldermen. Wiltshire acted as president pro-tempore during the meeting. Photo by Cathy Cook

This story has been updated to clarify that additional city funding may go toward paving handicapped parking spots in City Park, not Road and Bridge Bond program funding.

The Poplarville Fire Department is creating 10-hour shifts on weekends to supplement the department’s coverage on Saturday and Sunday.

The department answers a bit less than one third of its call volume on the weekend, said Fire Chief Jason Bannister. The additional shifts will be run until the end of March, which is through the second quarter of the fiscal year. At that time the Poplarville Board of Aldermen will evaluate the Fire Department’s budget to determine if the supplemental shifts should continue.

In a separate matter, the Board decided to wait to approve a revised body camera policy for the police department until after Police Chief Greg Harley has shown the policy to the city prosecutor.

In a separate matter, the Board took two bids for paving handicapped parking areas at City Park under advisement. The bids of $68,300 from Huey P. Stockstill, LLC and $70,475 from Warren and Warren Asphalt Paving LLC were higher than the $40,000 grant from The Mississippi Power Foundation that will be used to fund the project. The Board decided to revisit the bids later in the fiscal year after the city knows how much it needs to spend on currently ongoing paving and drainage projects. That will allow the Board enough time to determine how much city funding remains available to be used toward the project at City Park.

In other business the Board:
—Approved a pay request from Hensley R. Lee Contracting, Inc. for $27,180 for drainage maintenance work performed as part of the 2019 Road and Bridge Bond program.