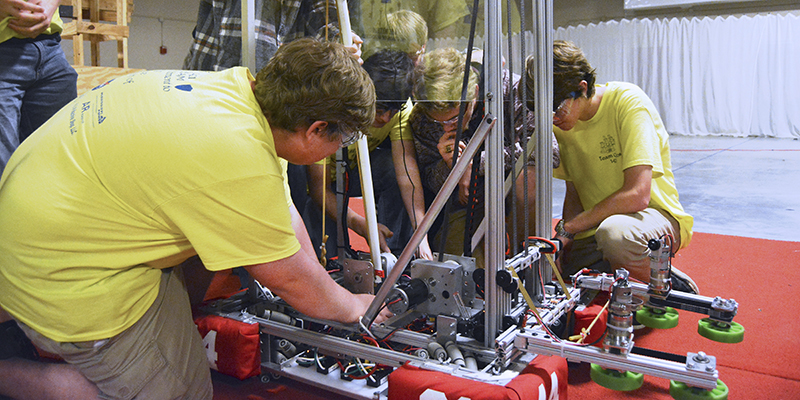 Team CHAOS shows off its robot during a 2018 open house. The team kicked off its season Saturday at Stennis Space Center, where members learned what materials they will receive to complete competition objectives this year. File photo.

Team CHAOS attended the For Inspiration in Science and Technology kickoff at Stennis Space Center’s INFINITY Science Center last week where they learned about the rules and received the robotics kit they will use to compete this year. The kickoff marks the start of the robotics team’s season.

The FIRST Robotics Competition challenges students to design and build robots that can overcome different obstacles and accomplish specific goals every year.

After the kickoff, the team’s job is to brainstorm and create design sketches, and then they will start building a robot from the kit they received at the kickoff, Balch said.

This year’s game brings back a familiar challenge—building a robot that can hang from a bar—and new challenges like programming a light sensor to read colors to spin a wheel, said Balch’s husband Donald.

The team had over 30 members last year, and Balch expects to have a similar number of kids participate this year. Over the last three years the team has grown, because students encourage their friends to join, said Balch.

The competition not only entices students to become interested in programming light sensors and designing robots, but the team also caters to students interested in carpentry, mechanics and art, Balch said.

“They don’t have a problem getting in there and using power tools,” Balch said.

The team will compete in a regional competition in Arkansas on March 4, before competing in the Bayou Regional in New Orleans on March 24, said Balch. Although the competition requires a lot of financial commitment from the team, the students do not pay fees, said Balch. Instead they fundraise from the community.

“You don’t have to pay a big fee up front. It allows us to have students that might not have otherwise have been allowed to participate. I encourage anybody to check it out,” Balch said.

The team will have an open house before their first competition near the end of February, so community members can see the work they do. Students interested in joining the team can speak with their school counselors or visit the FIRST Robotics website. Anyone interested in sponsoring the team can contact Balch at kbalch@edu.com.